An alleged Novichok poisoning of a British pair some 12 kilometers from Salisbury looks set to breathe new life into the Skripals saga. Analysts told RT it is just what the UK, “hell-bent on vilifying Russia,” wanted.

Charles Rowley, 45 and his girlfriend, Dawn Sturgess, 44, were hospitalized on Saturday after suspected contact with “an unknown substance” that was later declared by UK counter-terrorism chief Neil Basu to be Novichok, the same nerve agent that London claims was used in an attempted assassination of former double agent Sergey Skripal and his daughter, Yulia, on March 4.

While it is yet to be determined how the substance was transmitted and if it was from the same batch that caused the Skripals to slip into a coma, the Skripal case is already back on the front pages. 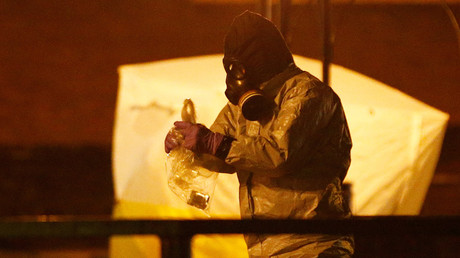 Even British Home Secretary Sajid Javid, who has warned against jumping to conclusions and asked to “give space” to police, felt it was appropriate to point out that the Amesbury incident “follows the reckless and barbaric attack” in Salisbury.

Dan Kovalik, an American human and labor rights lawyer, has told RT that while the UK has not pinned blame on anyone as of yet, “it seems to be the British government trying to go out of the way to link the two cases so they can somehow blame Russia.”

The timing of the new poisoning is especially important since it took place during a hugely successful, and so far incident-free, FIFA World Cup in Russia, Kovalik said.

“I also find it very curious that this is all happening during the World Cup in Russia, when Russia is getting a lot of good publicity and Britain seems hell-bent on vilifying Russia.”

It’s almost inevitable that Russia will be dragged into the case, Kovalik agreed, even as he asked rhetorically, “what would be Russia’s intention?It makes no sense.” Just like it wouldn’t have made sense for Russia to poison Sergei Skripal, since “Russians have never killed anyone in spy-swap situation” and there was no reason for Russian intelligence to wait for over 10 years to get to them.

However, this time, with the victims’ lack of any connection to Russia whatsoever, “trying to link them to Russia is just absurd.”

On the other hand, there is hope that British authorities have “learned the lessons” and will not rush to early conclusions, said Mohammed Shafiq, chief executive of the UK-based Ramadhan Foundation.

“I hope that the reaction from the British government is going to be more conciliatory than it was in the past.”

One possibility is that the UK will want to use the story to draw attention back to itself, as it seeks a new, more assertive stance after Brexit.

“The important thing here is that Britain is a world power, as is Russia, and we’ve got to change our foreign policy to reflect the new dynamics of the world post-Brexit and I think what is happening subtly is we have a government that is more determined to score headlines than to actually engage in a dialogue.”