Flush military chiefs have been handed an £800-million budget boost as they consider new bases in the former British protectorate of Oman and beyond to re-establish its power east of the Suez Canal.

In a statement issued on Friday, Defence Secretary Michael Fallon lauded his department’s bolstered £35.1 billion budget. It is the first increase in six years.

“Nothing is more important than defending our country and protecting our people,” said Fallon. “With increasing threats to our security, we have chosen to increase defense spending and give our Armed Forces what they need to keep Britain safe.”

Threats emanating from the Middle East and the perceived rise of China as a major military and economic power were used to justify the budget boost.

Britain hopes to re-establish substantial, permanent bases east of the Suez Canal to complement its Indian Ocean island of Diego Garcia – currently leased to the US Air Force – and training facilities in the Sultanate of Brunei.

Controversial efforts to expand a Royal Navy base on the island Kingdom of Bahrain – condemned by campaigners for its rampant human rights abuses – are also well underway. In November 2015, Foreign Secretary Philip Hammond attended a ceremony at the Mina Salman Port to mark the beginning of the expansion.

Fallon, who is visiting the region in part to rescue a deal to sell Eurofighter jets to Qatar in the face of French competition, told a press conference that Britain wants a permanent base in Oman, the Muscat Daily reports.

“We have been conducting land training here, but we have not had a permanent presence. We want to put that on to a more permanent base by establishing a permanent training hub,” he said.

A former British colonial protectorate and close ally, Oman is an absolute monarchy and is itself a regular buyer of British arms, signing a deal for 12 Eurofighters from UK arms firm BAE Systems in 2012. 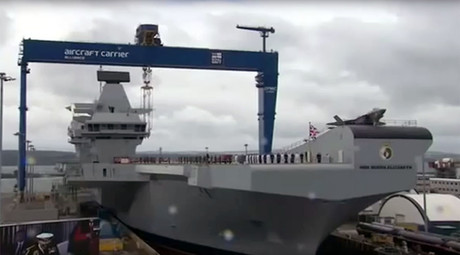 Approached by Defence News on Friday, a Ministry of Defence (MoD) official confirmed the UK wants to “look at options” for a permanent land base and a new port for the Royal Navy.

China, which is investing heavily in Africa in exchange for resources, is a key driver for Britain’s stride eastward – known in strategic circles as the ‘Pivot to Asia’.

The East African state of Djibouti announced in January that a “consensus” had been reached with the Chinese government to establish a military logistics base there to support China’s UN-mandated anti-piracy operations.

Another nation in Britain’s strategic crosshairs is Lebanon, which Foreign Secretary Philip Hamming described on Friday as key to the region’s “security infrastructure.”

Hammond said the country is Europe’s “first line of defense” against Islamic State (IS, formerly ISIS/ISIL) and refused to rule out launching airstrikes within its borders in the event of a jihadist incursion.

Lebanese artillery routinely shells jihadist groups along the Syrian-Lebanese border. Britain has provided military aid in an effort to up-skill the three infantry regiments charged with defending the porous frontier against Islamist assault.