The Supreme Court ruled Monday that North Carolina relied too heavily on race when redrawing two congressional districts in the Tar Heel State. The justices unanimously rejected the “reshuffle” of voters in District 1 and voted 5-3 to reject that of District 12. The decision upheld a lower court’s ruling from last February.

“The Constitution entrusts states with the job of designing congressional districts,” Justice Elena Kagan wrote for the majority. “But it also imposes an important constraint: A state may not use race as the predominant factor in drawing district lines unless it has a compelling reason.”

In recent statewide and federal elections, North Carolina split along partisan lines, but Republicans hold 10 of the 13 congressional districts in 2016, compared to only six in 2010. The GOP-controlled legislature, which redrew the map in 2013, argued that its redistricting effort was an attempt to protect majorities for its politicians, which is allowed, and not a way to diminish the impact of minority voters.

Justice Samuel Alito, joined by Chief Justice John Roberts and Justice Anthony Kennedy, dissented on the court’s ruling for the 12th District, believing that the district was redrawn to help Republicans, not to disenfranchise black voters in neighboring districts. 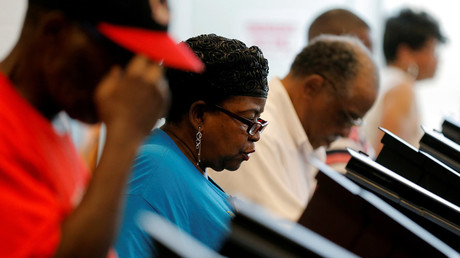 “Partisan gerrymandering is always unsavory, but that is not the issue here,” Alito wrote, referring to redistricting that favors one party. “So long as the legislature chose to retain the basic shape of District 12 and to increase the number of Democrats in the district, it was inevitable that the Democrats brought in would be disproportionately black.”

Monday’s ruling, Cooper v. Harris, is significant because of a 2013 decision in which the Supreme Court voted 5-4 to overturn a key part of the Voting Rights Act (VRA) of 1965. This law was put in place during the Civil Rights Movement to obstruct voting for African-Americans in historically racist states as part of the systemic discrimination known as Jim Crow laws, which were adopted in the century following the abolition of slavery.

The part that was invalidated, Section 4, explained the formula used by Congress to identify regions of the US subject to extra scrutiny when local lawmakers try to change election rules. States that prevented African Americans from registering to vote or running for office, in addition to other infractions, were singled out by Section 4.

Despite the 2013 decision, federal courts still found that state redistricting and voter identification laws are discriminatory. Along with such rulings in North Carolina, judges held that two different strict voter ID laws in Texas and the use of prison populations to manipulate voting districts in Florida and Virginia were all unconstitutional.

The Supreme Court also upheld the practice of creating voting districts based on the total population, throwing out a challenge last April that would have seen them redrawn based on eligible voters instead. The decision was seen as a boon to the Democrats, as accounting for the total population, which includes children, felons, and noncitizens, can lead to vast differences in the number of voters in a particular district, as well as differences in the power of those voters.

In 2015, the Supreme Court also found that individual majority-minority legislative districts in Alabama were racially gerrymandered, forcing the state to redraw its electoral map. In March, the justices called for further review of 11 state legislative districts in Virginia, because it appeared that “race for its own sake” was unconstitutionally “the overriding reason for choosing one map over others,” Kennedy wrote.

“This is a watershed moment in the fight to end racial gerrymandering,” former US Attorney General Eric Holder, who is now the chair of the National Democratic Redistricting Committee after focusing on redistricting during his time at the Department of Justice, said in a statement.

“North Carolina’s maps were among the worst racial gerrymanders in the nation,” he continued. “Today’s ruling sends a stark message to legislatures and governors around the country: Racial gerrymandering is illegal and will be struck down in a court of law.”

Governor Roy Cooper (D-North Carolina) was named as a plaintiff in the case, even though he was not yet in office when arguments were heard. He praised the decision Monday.

Republicans complained about the ruling, however, saying it compounds “the confused state of the law.”

“The Supreme Court says race can be a factor in redistricting but not the predominant factor, a rule that is so vague, so broad, and so lacking in a definable legal standard that it is not really a rule at all,” Hans von Spakovsky of the conservative Heritage Foundation said.