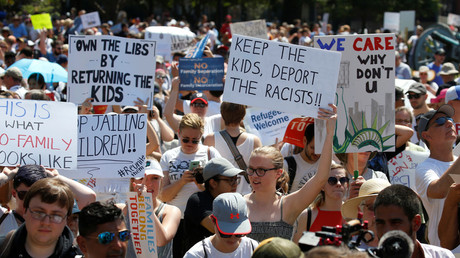 Hundreds of thousands of people are hitting the streets of US cities to demand that President Donald Trump reunite families separated at the Mexico border, end family detentions and abolish his ‘zero-tolerance’ policy.

Protests were underway throughout the entire country on Saturday, with the main demonstration taking place in Washington DC’s Lafayette Square. More than 30,000 people had already turned up to that protest less than two hours after it began, according to organizers.

The Families Belong Together national day of action was organized by dozens of advocacy groups, including MoveOn and the American Civil Liberties Union (ACLU).

Organizers have three demands for the Trump administration: For the government to reunite families separated at the border, to end family detentions and to end its zero-tolerance policy towards those crossing into the US illegally.

Protesters could be seen holding signs proclaiming “Families Belong Together” and “Immigrants are welcome here,” as well as “Love has no borders.”

Other signs called for the abolishment of US Immigration and Customs Enforcement (ICE), the agency that has been tasked with carrying out Trump’s zero tolerance policy.

Around 200 protesters also turned up along the route to Trump’s golf course in Bedminster, New Jersey, ahead of his arrival to the site on Saturday.

Border officials separated nearly 2,000 children from their parents between April 19 and May 31 – a practice which many child care experts and the president of the American Academy of Pediatrics likened to child abuse. Although Trump later reversed his decision to take children away from their mothers and fathers, many remain separated.

Protests were scheduled for all 50 states, Anna Galland, executive director of Move On, told the Huffington Post. A total of 628 rallies were registered, including some in international locations such as Berlin and London.

The protests come comes as lawmakers are at loggerheads over immigration legislation after a bill designed as a “compromise” between conservative and moderate Republicans in the House failed this week. The bill would have stopped the practice of splitting up families, funded the president’s border wall, limited legal immigration and created a pathway to citizenship for some “Dreamers.” It failed by a 301-121 vote, losing the support of every single Democrat and 112 Republicans. House lawmakers are now on their July 4 recess, and are due to return on July 10.

The recent failure to pass any sort of immigration reform comes after similar foot-dragging under the George W. Bush and Barack Obama administrations, with each failing to get legislation passed through both chambers of Congress during their presidencies.