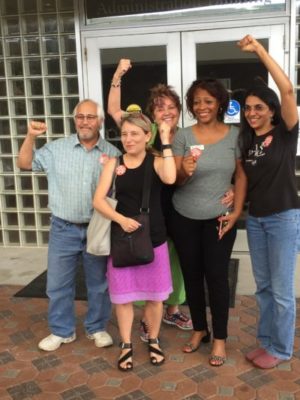 Adjuncts of the world unite!

Throughout all my formal studies, I continued to be an artist model and it wasn’t until I began teaching in college that the paths of teaching and modelling crossed in irreconcilable ways. My first teaching gig was at New College of California in 1988, teaching Soviet Personality Theory, a course that I made up. About the second week I was teaching there the booking secretary of the Model’s Guild offered me a modelling job in the New College Art Department. The possibility of students in an art class turning up in my Soviet Personality Theory class was not a prospect I wanted to consider. At that point I realized that I was at the end of the line of my modelling life. From that point on, while I was expanding my part-time teaching work, I also took part-time work as a psychological counselor, working in halfway houses for two years. Throughout it all I continued to read about two hours a day, come hell or high water.

The directors at the halfway houses didn’t know what to make of me. Here I was with a masters degree in counseling. Shouldn’t I stop reading since I was done with school? If I was going to read, the least I could do was read books in my field. But here I was reading Stephen J. Gould’s Ontogeny and Phylogeny, Bohm’s Causality and Chance in Modern Physics and Bergson’s Creative Evolution. After a while I would hide the books, so I didn’t have to explain myself.

“Open your mouth and keep…