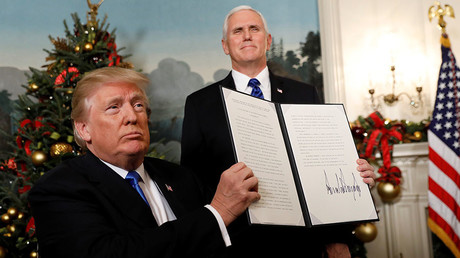 US President Donald Trump’s decision to recognize Jerusalem as the capital of Israel was met with global condemnation, with some Muslim nations calling for armed resistance and European Union urging compliance with UN resolutions.

Shortly after Trump’s announcement Wednesday, Palestinian Authority President, Mahmoud Abbas, said the US could no longer serve as mediator of Israeli-Palestinian peace talks. He dismissed the American move, saying Jerusalem is the “eternal capital of the State of Palestine.”

Palestinian group Hamas called for a new uprising against Israel in response to the American decision.

Hezbollah leader, Hassan Nasrallah, backed Hamas’ calls for a new “intifada” against Israel. Nasrallah said by this announcement, “Trump told Israel, that his Jerusalem is for you and it is under your sovereignty.” He also warned that Muslim people and their sacred sites in the city, including the al-Aqsa Mosque, were now in “extreme danger” as a result of Trump’s announcement.

The recognition of Jerusalem as the Israeli capital is America’s “new conspiracy” against the Islamic world, Iranian President Hassan Rouhani said. The nations in the region must “be aware and ready in the face of the US, the Zionist entity (Israel) and their tails,” added.

Turkey’s leadership warned that Trump’s ruling would have disastrous consequences for the Middle East and called on Washington to reverse its decision. “The US has pulled the pin on a bomb ready to blow in the region,” Turkish Prime Minister, Binali Yildirim, said, echoing an earlier statement by his president, Recep Tayyip Erdogan.

Syria also slammed the recognition of Jerusalem as Israel’s capital, saying it amounted to a “crime.”

Saudi Arabia said it has followed Trump’s announcement with “with deep sorrow” as it represented “a big step back in efforts to advance the peace process” between Israel and Palestine. The Gulf Kingdom urged Washington to reverse the move, also warning against “dangerous consequences” of moving the American embassy to the disputed Holy City.

The Iraqi government expressed concern that Washington’s recognition of Jerusalem may lead to a “dangerous escalation that would fuel extremism and create conditions favorable to terrorism.” While a local Shia paramilitary group, Harakat Hezbollah al Nujaba, said the “stupid decision” places US troops in Iraq in danger.

European reaction to Trump’s declaration was less emotional, but negative as well, with France and Germany pointing out that it disregarded all international agreements. French President Emmanuel Macron expressed regret at Trump’s “unilateral” decision, underlining that France “does not approve of” it.

Angela Merkel’s spokesman said the German Chancellor “doesn’t support” the US recognition of Jerusalem as Israel’s capital. In a statement, Merkel said Berlin was sticking to the relevant UN resolutions, which make clear that “the status of Jerusalem needs to be negotiated as part of negotiations on a two-state solution.” German Foreign Minister Sigmar Gabriel warned the new US stance would provoke a “new escalation in the conflict between Israel and the Palestinians.”

American recognition of Jerusalem’s capital status was only welcomed by Israel itself, with Prime Minister Benjamin Netanyahu praising Trump.

“This is a historic day,” Netanyahu said, expressing hope that “many” other nations will follow in footsteps of the US.