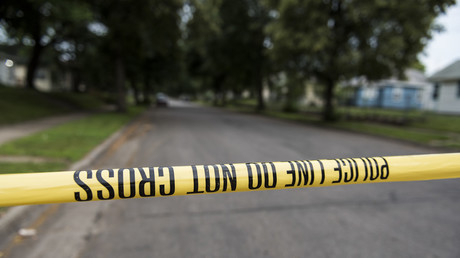 A murder suspect in Kansas City shot three police officers before he was fatally shot during a gunfight with other officers, according to local authorities.

The incident began when officers were conducting an investigation at the Sky-Vu Motel while seeking a person of interest in the death of Sharath Koppu, an Indian student at the University of Missouri, who was shot and killed after an unknown person opened fire during an attempted robbery at the restaurant where Koppu worked.

During that investigation, the officers encountered a suspect who fired on them with a rifle, Kansas City Police tweeted on Sunday. Two officers were struck but remain in stable condition.

Approximately 12:15pm undercover and tactical officers were conducting an ongoing investigation at 8300 E 40 hwy. They encountered a suspect who fired on officers with a rifle. Two officers were struck and are at the hospital in stable condition.

The suspect then fled the scene in a car which was recovered a short time later. As police were conducting a search near the vehicle, the suspect once again fired at officers. A third officer was struck, was hospitalized and also remains in stable condition.

Shortly afterwards, the suspect barricaded himself in a house. He later emerged and once again began shooting at officers. A gunfight erupted, and the suspect was later declared deceased by the Kansas City Fire Department.

As of 2p officers are still working to confirm the house involved is unoccupied but it is believed the only suspect is in custody at this time. We are not actively searching for any other suspects.

The suspect, who police have not named, was under surveillance in the death of Koppu. “We’ve been looking for him all week…this is the first time we laid eyes on him,” Kansas City Police Chief Rick Smith told reporters.