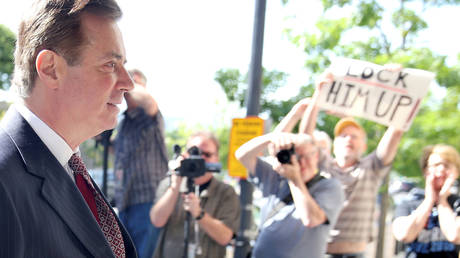 Special Counsel Robert Mueller has castigated former Trump campaign chairman Paul Manafort for “repeatedly and brazenly” violating the law, and called on a federal judge in Washington DC to punish him appropriately.

Mueller denounced Manafort in an 800-page sentencing memo filed on Friday and published on Saturday. Manafort already pleaded guilty last September to conspiracy and obstruction charges, stemming from his time working as a lobbyist for former Ukrainian president Viktor Yanukovych, over a decade ago.

Manafort struck a plea deal at the time and agreed to cooperate with Mueller’s ongoing ‘Russiagate’ investigation. The plea deal was later terminated when the court found –after the agreement– that Manafort had lied to investigators.

#BREAKING: The sentencing memo for the Manafort case in DC is now available. The Special Counsel does not recommend a specific sentence. They are withholding the right to do so pending the sentence in the EDVA case. They state the court has the discretion to run any sentence pic.twitter.com/PGMShAWXjY

“His criminal actions were bold, some of which were committed while under a spotlight due to his work as the campaign chairman and, later, while he was on bail from this Court,” Mueller’s memo reads.

In his memo, Mueller did not ask for a specific sentence, but noted that federal guidelines call for a sentence of between 17 and 22 years for such offences.

Manafort is also due to be sentenced in a separate case in Virginia next month, after a jury there found him guilty of eight counts of tax and bank fraud. Those offences attract a sentence of between 19 and 24 years in prison. The memo states that Mueller may ask the DC court to impose its sentence consecutive to the Virginia one.

If the recommended sentences are applied consecutively, the 69-year-old would, in all likelihood, die in prison.

Although serious, none of Manafort’s convictions relate to so-called ‘collusion’ between the Trump campaign and Russia. Finding such collusion was the original purview of Mueller’s investigation when it began in 2017. The investigation is widely speculated to be drawing to a close, with Mueller’s final report expected in a matter of days or weeks.