Despite his promises to curtail Washington’s foreign interventions, Donald Trump has been a bigger warmonger than either Barack Obama or George W. Bush, says Redacted Tonight host Lee Camp.

He notes that according to the Pentagon’s own statistics, over his two terms Bush unleashed an average of 24 bombs a day, a number that went up to 34 per day under the last Democrat president. Under Trump, the figure has risen to 121 bombs a day, for a total of over 44,000 per year.

Yet among the copious lines of attack against the incumbent, this one is rarely invoked by the leading US news outlets. 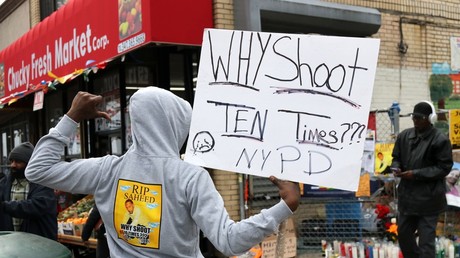 “Which is more outrageous, the crazy amount of death and destruction that we are creating around the world, or the fact that the mainstream media never investigates it?” Camp asked his audience during the latest edition of his show.

“They say he is a racist, bulbous-headed idiot, which is totally accurate, but they don’t criticize the Amityville Massacre our military is perpetrating by dropping a bomb every 12 minutes.”

Camp also insists that the American public is under the mistaken impression that sophisticated precision targeting means only enemy targets die – pointing out that the CIA itself admits that 98 percent of its casualties are not named adversaries from its own kill list.

Later during the show, Camp also focuses on the extent of protest suppression by US law enforcement, and the continuing risks poor Americans suffer from trying to save money on private surgery in segments featuring regulars Naomi Karavani and Natalie McGill.