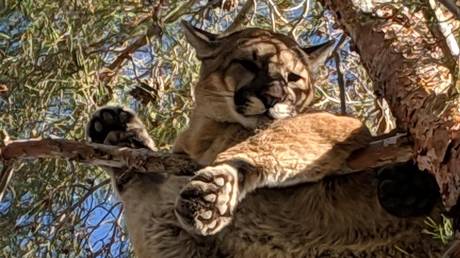 A huge mountain lion that was spotted casually relaxing up a 50ft tree in California had to be tranquilized and “rescued” by firefighters after a scaredy-cat neighbor called the authorities.

A homeowner in Hesperia, southern California noticed the animal lounging atop the tree outside their home on Saturday afternoon. The cougar had supposedly ventured from the nearby San Bernardino Mountains and decided to perch itself on the tree’s branches.

Even though the lion was minding its own business and taking some much-needed downtime, the authorities determined that leaving the animal to relax in peace would pose a “danger” to the community.

While San Bernardino County firefighters are familiar with rescuing cats from trees, this mission took a little bit more manpower.

READ MORE: A craving for berries gets bear stuck in a storm drain, prompting rescue via manhole (VIDEOS)

The State Department of Fish and Wildlife tranquilized the animal, and firefighters lowered it to the ground using a rescue harness. A biologist then evaluated the cougar before it was released back into the wild.

While it’s not uncommon for wildlife to venture outside their habitat and attacks on humans are rare, big cats have been known to chow down on pets and livestock.

“It is common for young mountain lions to wander outside what some would consider normal habitat in an attempt to establish their territory,” said Kevin Brennan, a biologist with the Department of Fish and Wildlife.

One local took a stronger shine to the big cat than the woman who called in back-up for its removal:

Meanwhile, some took to Twitter to point out that maybe it wasn’t the lion that was in the wrong place…

Maybe it’s time to move the community away from wildlife?

Yes. We are destroying their habitat.