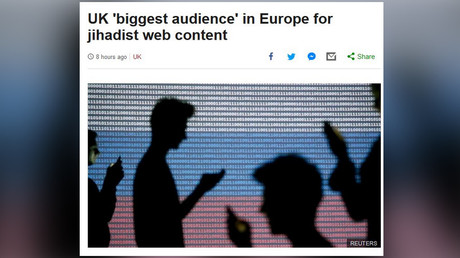 The Russian Embassy in the UK was outraged after a BBC story about online jihadist propaganda in the UK featured a Russian flag. Moscow wondered what the tricolor has to do with extremists on British soil.

The BBC article dubbed ‘UK ‘biggest audience’ in Europe for jihadist web content’ appeared on the website on Tuesday. The report cited a study by the Policy Exchange think tank, saying that “online jihadist propaganda attracts more clicks in the UK than any other country in Europe.”

The think tank doesn’t mention Russia at all in its 131-page long report. Nor does the BBC story.

However, the cover picture for the story featured vague figures with smartphones against the background of the Russian white-blue-red tricolor.

“Hey, BBC, what does Russian flag have to do with online jihadist propaganda in UK?? Change your graphic designer or your photobank (sic),” the Russian embassy in UK wrote on Twitter.

The BBC has not made any commentary on the choice of cover photo. However, it did change the picture, putting the ‘usual’ gun-wielding Islamic State (IS, also known as ISIS/ISIL) jihadists on the cover.

BBC are morons. They are actually they ones who spread jihadi propaganda on all fronts.

The BBC is banned in my home because of their obscene propaganda. Awful people

Western propaganda? fooling the no thinkers?