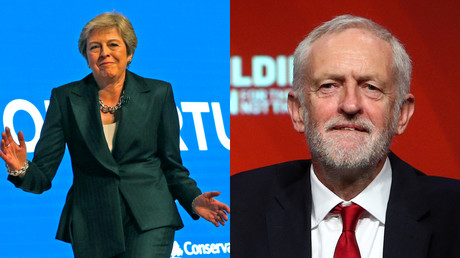 While the mainstream press hailed Theresa May’s conference speech as her ‘best ever,’ many on social media called her out for her apparent obsession with Jeremy Corbyn, in a speech that saw as many dance moves as it did policies.

May, who had entered the Conservative conference hall, in Birmingham, awkwardly flailing her arms around while performing her now-signature ‘robot’ move, eventually stopped dancing to deliver her speech.

Firstly and throughout, May slammed Corbyn and the Labour Party, so much so that many on social media called her out for her “obsession” with her rival.

Corbyn barely mentioned Theresa May in his speech at Labour conference – he didn’t need to – Labour has policies and ideas. Theresa May prioritised personal attacks in her speech because that’s all the Tories have – they’re terrified, with nothing to say. almost sad, really.

Remarkable for the Prime Minister to dedicate so much of her speech to Labour, our leader, even our campaign slogan (and tellingly, so little to her own policies). Theresa May and the Conservatives are out of ideas, unable to defend the failed status quo they represent.

She does realise that by making her entire speech about Corbyn she makes herself look a) terrified of him and b) short on any actual ideas? #CPC18#theresamay

In a speech strong on patriotic rhetoric, but short on substance, the PM used much of her time to warn Tory party members of the dangers of letting a Corbyn-led Labour Party into power. She claimed Labour didn’t stand for “common values” anymore under Corbyn and suggested her rivals were in the pockets of the Russian government.

She told party delegates: “Corbyn only approves of military intervention if the UN Security Council agrees. That would mean Russia having a veto. We cannot outsource our conscience to the Kremlin.”

The Tory Party Conference 2018 in brief: ‘You must hate Russia! ‘You must hate Jeremy Corbyn!’ Politics in Britain has never been this low. https://t.co/JFyv1DpJvl

I see she is wasting time with the Corbyn rubbish because she hasn’t got anything else to say. She can’t list all her great policies because there aren’t any. So it’s Russia and security now. Someone told her to rile up the ‘patriots’.

Pathetic to basically call Corbyn a traitor. He questioned whether Russia was definitely to blame as facts were becoming clear. Not treachery just common sense.

In a sign of attempting to reach across the benches, May highlighted that a staunch Corbyn ally, Labour MP Diane Abbott, received more abuse than any other MP on social media. In response Abbott queried whether the PM’s Tory Party was partly responsible for the abuse.

Some nice words from Tory leaders like Theresa May and Sajid Javid. Makes you wonder who was responsible for the Tory party’s relentless personal attacks in the general election campaign 2017 #CPC18pic.twitter.com/w3Ar0dZLkA

With words that could have come straight from the Labour leader’s mouth, May told party activists that ‘austerity is over.’ The pledge puts her at odds with Chancellor Philip Hammond. Earlier in the conference, he had told the Tory faithful there would be no let up on austerity, as there were “no shortcuts and no free lunches on the road to a better Britain.”

May’s claim that this is an end to austerity is a complete con. The Tories have promised this before – and it was a con then too. The Government has already told us that spending for the next 4 years will be hit by many more vicious cuts. Nothing, sadly, has changed.

Other policy announcements of note included a pledge to scrap borrowing caps for councils to build new homes and a freeze on fuel duty. Hardly the radical change that many see Corbyn as bringing.

While May was attacked by many, she did find allies in the mainstream media, with some prominent journalists hailing her speech as her best yet.

May delivers one of her best speeches, and will send activists home in better heart than they expected this morning. But European Council in two weeks time means Brexit will soon reassert itself

Snap verdict: Best speech of May’s premiership. Ends conference on a high, cements her position as leader. But nothing has changed. The Brexit reckoning is delayed.

That was surely the best speech Theresa May has ever given. I wonder if the numbers will add up to much. #CPC18

It remains to be seen whether or not May’s ‘best ever’ speech will be remembered for more than a dance, but at least the ‘Maybot’ will knock Boris off the front pages. At least for now.