The majority of Americans would prefer to stay away from military conflict with Iran as tensions mount between Washington and Tehran, a poll has revealed. However, most think the US President would be tempted to start it.

Just 23 percent of the respondents of a HuffPost/YouGov survey, published on Friday, approved the idea of the US going to war with Iran. The number of opponents, on the other hand, is more than doubled – 53 percent do not support such a scenario, including 37 percent of “strongly opposed” respondents. The remaining quarter of the surveyed was undecided.  Most of the more hawkish respondents were found to be Trump’s campaign supporters. 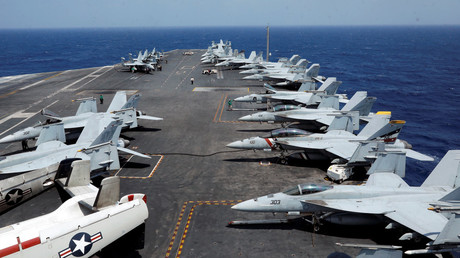 Despite the fact that most Americans agree with Trump that Iran is no friend to the US, they are not supportive of his hawkish approach to their countries’ relations, according to the survey. Some 43 percent were found in opposition to the US leader’s handling of issues related to Iran, while 36 present supported him. Moreover, more than a third think Trump’s actions only worsen the already strained situation.

The poll was conducted after Washington and Tehran exchanged a new barrage of bilateral threats. Last week, Iranian President Hassan Rouhani said that a war with Iran would be “mother of all wars,” provoking Trump’s harsh threat with “consequences the likes of which few have ever suffered before.” Later the commander of the Iranian elite Quds Force warned the US against a military conflict that “will destroy everything you own.”

On Friday, the ABC reported citing “senior figures” in the government that Washington is preparing to bomb Iran’s nuclear facilities and the strike may come “as early as next month.” Both Australian Prime Minister Malcolm Turnbull and US Secretary of Defense James Mattis later dismissed the claims.

READ MORE: US strategy against Iran may lead to lose-lose scenario for everyone

US-Iranian relations have heavily deteriorated since the US unilaterally pulled out from the 2015 nuclear deal, known as Joint Comprehensive Plan of Action (JCPOA), in May. The move met strong international condemnation, including from the US allies, who refused to follow Washington’s suit.