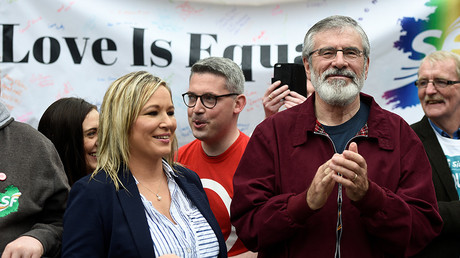 Northern Ireland’s two main political parties have failed to reach a new power-sharing agreement, and no deal is expected in the short-term, putting UK Prime Minister Theresa May and her conservative government under yet more pressure.

“Obviously we are disappointed that we don’t have an agreement this afternoon and indeed we’ve been disappointed for quite some time that we haven’t been able to reach an agreement,” Democratic Unionist Party (DUP) leader Arlene Foster told reporters Tuesday, as cited by Reuters.

“However we are going to keep working at it over the summer and hopefully we can come to an agreement later on in the year,” she added.

The Protestant pro-British Democratic Unionist Party (DUP) and the Irish Catholic nationalist Sinn Fein Party has been in talks since regional elections in March to form a new government. Both became increasingly inflexible as the talks continued and have blamed each other for constantly missing deadlines, the last of which came last Thursday.

The British government warned Monday that it may have to step in to manage public spending in the province and may even be forced to call a new election if the impasse is not broken soon.

Sinn Fein experienced a historic electoral breakthrough in regional elections this year, and has seized upon the unique set of circumstances in the aftermath of the UK general election to further its own political agenda in the region.

The British Conservative Party under Prime Minister Theresa May failed to reach a majority government in the UK, effectively forcing a deal with the controversial DUP in order to maintain power. The agreement has afforded the DUP a degree of power, far more than it had ever previously exercised over the British government.

Neither side is willing to cede ground given such unprecedented vantage points, further eroding hopes of an agreement in the near future.

“What this constitutes is a monumental failure on behalf of Theresa May. She has set back decades of work that has been done here throughout the years,” said Sinn Fein’s Northern Ireland leader, Michelle O’Neill.

Sinn Fein leader Gerry Adams was more emphatic, “The Sinn Fein electorate will not consent to be governed by DUP on DUP terms.”

The news comes at a notoriously volatile time in Northern Irish politics as pro-British unionists begin their July marching season in commemoration of the 1690 victory by Protestant King William of Orange at the Battle of the Boyne.

A major sticking point between the two parties is the future of the Irish language in Northern Ireland.

“What’s wrong with expecting equality for young people who wish to speak and live their lives through the Irish language?” Michelle O’Neill said, as quoted by the Journal.

The Irish Language Act is something on which the two sides have long been diametrically opposed: Sinn Fein is adamant that legislation be passed affording the Irish language protected status, a demand which the DUP has consistently and repeatedly rejected.

There are no immediate signs of reconciliation and it could be several months before anything resembling a coherent power-sharing agreement takes shape.

Meanwhile, the ongoing Brexit saga has further backed the British Conservative Party into a corner, amid a slew of governmental mismanagement, most notably the recent Grenfell Tower blaze, which has sparked a nationwide investigation into public housing health and safety standards.