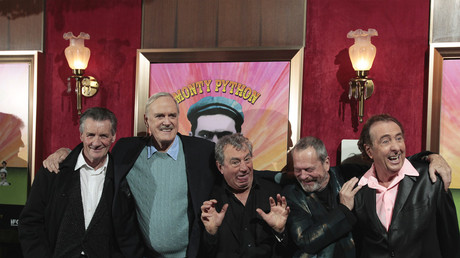 Actor John Cleese has defended the iconic comedy show Monty Python, calling it “remarkably diverse for its time.” The comments come as the BBC head of comedy said the show was “too white and Oxbridge” to be made today.

Cleese lauded the merits of the show in a series of tweets in response to comments made by the controller of BBC comedy Mark Allen. Allen claimed that audiences were tired of the “metropolitan, educated experience” and craved sketch shows and sitcoms with a “sense of place” rather than “six Oxbridge white blokes.”

Allen added that teams being assembled for shows today were going to be from a “diverse range of people who reflect the modern world and have got something to say that’s different and we haven’t seen before.”

Referring to Allen as the “head of social engineering,” Cleese defended the diversity credentials of Monty Python, joking that the show would meet the state-funded broadcaster’s diversity targets as it had a “poof” – referring to the late Graham Chapman – and “no slave owners.”

Unfair ! We were remarkably diverse FOR OUR TIME

We had three grammar-school boys, one a poof, and Gilliam, though not actually black, was a Yank. And NO slave-owners

“We were never ashamed to reveal the more feminine side of our personalities,” adding that the comedy troupe demonstrated its solidarity with the feminist struggle by ridiculing the “old-fashioned” sense of masculinity in the vast majority – “91.6%” according to Cleese – of its sketches.

AND…to demonstrate solidarity with all suffragettes, 91,6% of the people we ridiculed were male ( in the old-fashioned sense, that is ) https://t.co/KSdp7IyRU1

Cleese added that while Terry Gilliam wasn’t “actually black,” he “was a Yank,” a reference to American origins of his fellow Python.

First airing in 1969, the sketch show Monty Python’s Flying Circus ran until 1974. That was followed by a series of movies which have since become cult classics including Monty Python and the Holy Grail, Monty’ Python’s The Meaning of Life, and The Life of Brian, which lampoons the life of Jesus Christ.

Surreal and absurdist in style, and often pushing the boundaries of what was acceptable at the time, the content of sketches often saw the troupe cross dressing and poking fun at Britain’s rigid class structure.

In the movie Monty Python and the Holy Grail, which mocks Arthurian legend, class-conscious peasants of an “anarcho-syndicalist commune” discuss the merits of constitutionalism with a feudalist King Arthur.

The Life of Brian meanwhile, sees Eric Idle’s Stan, a member of anti-Roman independence movement the People’s Front of Judea, express his desire to “be a woman,” requesting from then on that he be called “Loretta” by his (“or her”) fellow revolutionaries.

Cleese,78, also deemed Terry Jones a “multiculturalist icon” due to having Welsh parentage, and accused Allen of being “the latest in a long line who don’t really know what they’re doing,” at the BBC – execs at the corporation in the 1960s were skeptical of the Monty Python’s merits when the show was first pitched and aired.

“When Python started, the Head of Light Entertainment loathed it, and at a Heads of Department meeting, six of them disliked it. Only Desmond Wilcox, out of eight, approved,” Cleese said in tweet titled “Comedy history lesson.”

When Python started, the Head of Light Entertainment loathed it, and at a Heads of Department meeting, six of them disliked it. Only Desmond Wilcox, out of eight, approved

Seemingly hitting out at some of the comedy currently being produced by the BBC, Cleese responded to a Twitter follower who called out the show Mrs. Brown’s Boys as being a comedy program that wasn’t actually funny. “Be fair,” Cleese said.

“There are lots of people who think it’s funny. Bless them…”