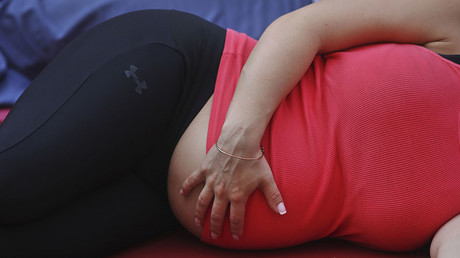 A mom-to-be cannot be called a “pregnant woman” – she is a “pregnant person,” the UK government reportedly said in an amendment to a UN treaty. The changes, which claim to consider trans parents’ rights, have triggered a backlash.

The UK has objected to use of the term “pregnant woman,” as it may “exclude transgender people who have given birth,” the Foreign and Commonwealth Office (FCO) said, adding that the correct term should be “pregnant people,” the Times reported on Sunday.

“We requested that the UN human rights committee made it clear that the same right [to life for pregnant women] extends to pregnant transgender people,” the FCO said.

READ MORE: ‘Sex’ question could be removed from UK census because it’s ‘transphobic’

The UK government officially submitted the proposed amendments to the International Covenant on Civil and Political Rights from 1976, the Times added. The text of the UN document says that “sentence of death shall not be imposed for crimes committed by persons… shall not be carried out on pregnant women.”

The reported amendment caused a backlash on social media, where right-wing politicians slammed the FCO’s decision to change the text of the UN treaty. David Kurten from UKIP urged British Prime Minister Theresa May to read a science textbook.

According to UKIP politician Peter Whittle, the amendment is merely “an insult to women.”

Critic and columnist Sarah Ditum‏ told the Times that the proposed change in the treaty is not “an inclusion,” but “making women unmentionable.”

“Having a female body and knowing what that means for reproduction doesn’t make you ‘exclusionary’. Forcing us to decorously scrub out any reference to our sex on pain of being called bigots is an insult,” she said.

READ MORE: ‘Being trans is not an illness’: May vows to scrap medical checks before gender reassignment

Earlier in October, Theresa May vowed to scrap medical checks for people who officially change gender. “Being trans is not an illness and it should not be treated as such,” she said.

Also in October, the Times cited an Office for National Statistics (ONS) report, saying that the “which sex are you” question in the UK census could be made voluntary, following claims it discriminates against transgender people.

READ MORE: ‘Sex’ question could be removed from UK census because it’s ‘transphobic’

In July, Hayden Cross, a Gloucester transgender man, gave birth to a girl. He became pregnant by an anonymous sperm donor three years after becoming legally male. However, the 21-year-old put his transition on hold to have a baby. Hayden, born Paige, was called the “UK’s first pregnant man” in the media.

“We recommend that sexual orientation monitoring occurs at every face to face contact with the patient, where no record of this data already exists,” the document released this October stated.

This “sex quiz” says that the patients over 16 will be asked whether they are “heterosexual,” “gay,” or “lesbian,” “bisexual,” or “sexually attracted to neither gender.” Patients can refuse to answer or say that they are not sure or don’t know their orientation.

The official NHS directive will come into force from April 2019, UK media reported.