A federal judge has declared a mistrial in the case of Christopher “Jake” Carrizal, the first biker to stand trial for his involvement in a 2015 shootout that left nine dead and 20 injured. The jury deadlocked with one juror refusing to change his mind.

The jury spent more than 14 hours deliberating before they sent a note to McLennan County 54th District Judge Matt Johnson, which said they could not reach a verdict on the charges against Carrizal.

The trial stems from a 2015 shootout between two rival biker gangs – the Bandidos and the Cossacks. Nine people were killed and 20 others injured after gang members opened fire on each other at the Twin Peaks restaurant in Waco, Texas.

Carrizal, the president of the Dallas chapter of the Bandidos, was charged with one count of directing the activities of a street gang and two counts of engaging in organized criminal activity for his involvement in the shooting. If convicted of any of his charges, Carrizal would face life in prison.

On Thursday, the jury sent a note to the judge, saying they had reached a unanimous verdict on one count, finding Carrizal not guilty of directing activities of a street gang, but they could not come to a consensus on the other two counts, a source told the Waco Herald Tribune.

The note said there was at least one juror who was “willing to wait a month or longer,” but refused to “review any evidence or testimony provided over the past weeks in the trial.”

“We don’t believe any amount of deliberation will change minds,” the note read, according to KXXV. “We have concerns if this takes much longer some of us will encounter financial difficulties.” 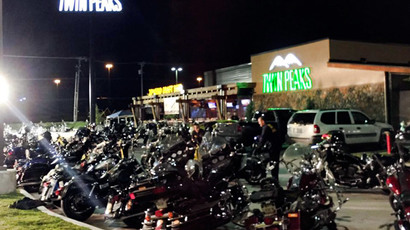 The jury foreman reported a juror identified as “Mr. P” who told the other jurors that he would not change his mind in deliberations because he had previous experience with the biker gangs, according to the Waco Tribune-Herald.

A courthouse source also told the Waco Herald-Tribune that there were never more than six jurors in favor of finding Carrizal guilty on any of the charges.

In response, Johnson informed the jurors that if they could not reach a unanimous verdict, a mistrial would be declared and the jury would be dismissed. Johnson also read them the “Allen charge,” which encourages a deadlocked jury to reach a verdict.

“The indictment and the unresolved counts will still be pending, and it is reasonable to assume the case will be tried again before another jury at some future time,” Johnson wrote.

Once again, Johnson read them the “Allen charge,” and the jury returned to deliberate. On Friday, they sent a new note to the judge, saying they were now deadlocked on all three counts.

Outside the courthouse, Carrizal said he was “feeling pretty good” as he hugged family members and friends.

The mistrial means that Carrizal could face an entirely new trial in the future. While a date has not yet been set, the courts would most likely have to process the rest of the 154 bikers that were indicted on criminal charges as a result of the shootout.