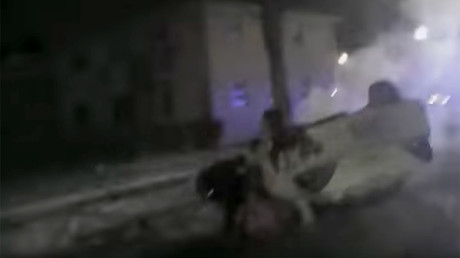 Two Milwaukee police officers are being hailed as heroes after dragging injured passengers from the burning wreckage of crashed car.

Officers Nicholas Schei and Nicholas Reid witnessed the near-fatal accident in the Hampton Heights area Tuesday, when the driver of a 1999 Pontiac Grand Am lost control and hit a utility pole.

We’re incredibly proud of these officers for risking their lives to save these crash victims. The officers will be nominated for a MPD Merit Award! https://t.co/sgTWa5uiQF

With the car upside down in the middle of the road, the two District Four cops sprung into action to rescue the occupants from the burning, crushed car.

Footage taken from a police bodycam shows plumes of smoke rising from the car’s hood. In the dramatic video, Reid and Schei race against time to drag two injured youngsters away from the flaming wreck.

According to the Milwaukee Police Department, the two men, who came up through the police academy together, are now in line to receive a merit award for their heroics.

“Officers Schlei, Reid and other officers from District Four risked their own lives and pulled the driver, a 16-year-old Milwaukee male, and another teenage male passenger from the car,” the police said in a statement.

“A third teenage male passenger from the vehicle was located nearby. All three victims were transported to a local hospital for treatment of their injuries,” it added.

READ MORE: ‘Nothing here to shoot other than blacks’: Florida cops’ racist texts revealed in probe

The rescue took less than 60 seconds. However, Schlei said, faced with one of the worst car accidents he has dealt with, the incident seemed much longer.

“I knew the car had the potential to become engulfed but at the time that was not what we were thinking. We were just thinking to keep going until everyone is out,” Schlei said in a press conference on Wednesday.

Officer Reid added: “Obviously, it’s a shock to anyone when you see that kind of car accident. We knew that we had to get those kids out because of the fire. That was our first instinct.”

The driver of the vehicle has been charged with reckless driving.