Ministry of Defence (MoD) psychologists apparently grilled a soldier about his childhood in what he believes was an attempt to avoid having to pay him compensation for post-traumatic stress sustained in close quarters combat.

The veteran, who is named only as ‘Soldier A’ by the Daily Express, won compensation after the MoD contested his claims and also lost his medical records.

“The MoD got a psychologist to ask me about my childhood and my relationship with my parents. I had a perfectly normal childhood but I had experienced some horrific things in Iraq,” he told the paper. 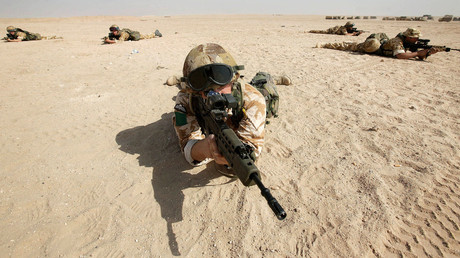 Soldier A took part in the infamous Battle of Danny Boy in Iraq in 2004, in which British soldiers with faulty communications equipment were set upon by insurgents. Troops had to bayonet charge the enemy in the hand-to-hand fighting that followed.

“The Danny Boy battle was like something out of a horror movie and it clearly caused me to develop PTSD.

“I saw things nobody should have to see. There’s no question it was that incident that caused my mental health problems and to insinuate they were caused by some meaningless event in my childhood is both wrong and deeply offensive,” Soldier A insisted.

He blasted the MoD, saying it was “obviously looking for an excuse to not take responsibility for veterans with mental health issues as a result of their service and is trying to shirk responsibility so it doesn’t have to deal with us.

“I think it’s terrible, I can’t imagine anything worse.”

Soldier A also told the Express that the military lied to recruits by promising healthcare and housing which never materialized.

Rhicha Kapila, who heads the Military Claims Team at Bolt Burdon Kemp legal firm, said the MoD and its top minister Sir Michael Fallon MP had a habit of letting military veterans down.

“The MoD needs to admit liability sooner. The sooner you can deal with these cases the better it is for everyone.

“A prolonged court case just means it’s even more time the veteran might be homeless or not getting medical care,” Kapila said.

“These are service men and women who have gone out and given their all for this country – they’re made sacrifices and prioritised their nation over their own personal wellbeing or even their own families.

“They deserve the right care when they return home,” she said.