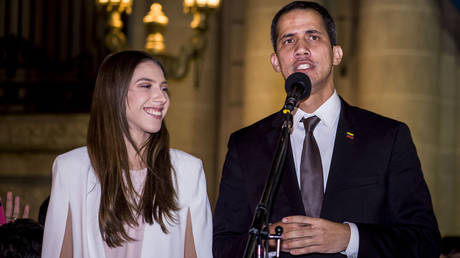 Fabiana Rosales, the wife of Venezuela’s US-backed opposition leader Juan Guaido, has been given royal treatment by officials in Miami-Dade, who gave the self-proclaimed ‘first lady’ the key to the county.

As Guaido drums up support for his cause on the ground in Venezuela, he passed the baton of liaising with Washington to his wife, 26-year-old Rosales. Rosales, an activist and journalist who married Guiado in 2013, had already met with US President Donald Trump, VP Mike Pence and US First Lady Melania Trump.

After rubbing shoulders with the bigwigs in Washington, Rosales headed to South Florida. On Friday, she again made headlines after she was welcomed by Mayor Carlos Gimenez and local lawmakers at Miami-Dade County Hall.

Rosales addressed the officials speaking about her desire to “restore” humanity in Venezuela and stop the “massacre” of children in in her home country, which has been plagued by severe economic crisis and political turmoil as her husband tries to seize power.

Local media came with reports fawning over Rosales, describing her as the “potent force in Venezuela’s opposition to the Maduro regime.”

The elated mood of the gathering culminated in Gimenez handing over to Rosales the symbolic golden key to the county in a festive ceremony. Gimenez said that he sympathized with Rosales because he himself was born in Cuba and has first-hand knowledge of totalitarianism, dictatorship and socialism – despite having been only six when he was brought to the US.

Also on rt.com
Running country like a business: Trump calls Venezuela ‘company,’ but is it a Freudian slip?


Guaido has been recognized by the US, its allies in the region as well as several European countries as the legitimate representative of the Venezuelan people. Washington was the first to recognize the self-declared ‘interim president’. Since then, it has sought to boost the credibility of Guaido, who, despite enjoying broad support from US allies, has been denied recognition by Russia, China and Turkey, who stand by Venezuela’s elected president Nicholas Maduro.

Trump has repeatedly said that “all options” remain on the table with regards to Venezuela, including a military intervention. US special representative for Venezuela, Elliott Abrams, known as a coup mastermind for his role in assisting anti-communist Contra rebels in Nicaragua and being involved in the 2002 failed coup attempt in Venezuela, has been leading the charge to oust Maduro from power. His efforts have been coupled with those of US National Security Adviser John Bolton, whose recent call on the Venezuelan Defense Minister to defect was rejected in no-nonsense terms.

In addition to increasing political pressure, Washington continues to suffocate Caracas with sanctions that have already crippled its economy. It has been reported that the US State Department told foreign oil trading houses and refineries that they should cut operations with Venezuela beyond what is dictated by the existing sanctions unless they want to face sanctions themselves.