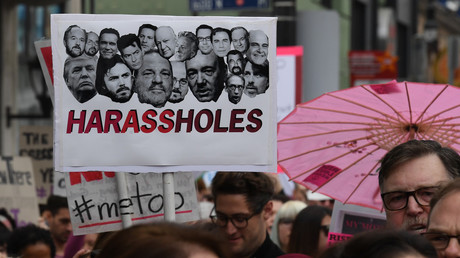 The #MeToo movement was supposed to make life easier for women in the workplace. It was all about respect and making real abusers pay a price for their behavior. But is it possible to have too much of a good thing?

One of the aims of the movement was to force a change in the conduct of men who said and did sexually inappropriate things in the workplace — a concept which few people could quibble with. A year on from its beginnings, however, it seems the movement has morphed into something else entirely — and ironically, it’s hurting both men and women.

The ‘Pence Effect’ and ‘gender segregation’

The #MeToo movement has taken down men across a wide spectrum of industries — but so far, Wall Street has avoided a huge public scandal — despite its reputation for being, well, a fairly sexist and male-oriented environment. So why has it escaped the #MeToo spotlight?


Two female reporters for Bloomberg interviewed 30 Wall Street executives and found that while it’s true that women might be afraid to speak up for fear of losing their careers, men are also so afraid of being falsely accused that they won’t even have dinner, or even one-to-one business meetings with a female colleague. They worry that a simple comment or gesture could be misinterpreted. “It’s creating a sense of walking on eggshells,” one Morgan Stanley executive said.

Bloomberg dubbed the phenomenon the ‘Pence Effect’ after the US vice president who previously admitted that he would never dine alone with any woman other than his wife. British actor Taron Egerton recently also said he now avoided being alone with women for fear of finding himself in #MeToo’s crosshairs.

I remember when a woman I was friendly/kind with perceived me as someone who wanted “more.” She wrote me a message about how she was uncomfortable. I’m gay. https://t.co/7z0X7Dwzkp

All these extreme strategies being adopted by men to avoid falling victim to an unjust #MeToo scandal are creating a kind of “gender segregation” on Wall Street, the reporters say.

The most ironic outcome of a movement that was supposed to be about women’s empowerment is that now, even hiring a woman on Wall Street has become an “unknown risk,” according to one wealth advisor, who said there is always a concern that a woman might take something said to her in the wrong way.


With men occupying the most senior positions on Wall Street, women need male mentors who can teach them the ropes and help them advance their careers, but what happens when men are afraid to play that role with their younger female colleagues? The unintended consequence of the #MeToo movement on Wall Street could be the stifling of women’s progress and a sanitization of the workplace to the point of not even being able to have a private meeting with the door closed.

Another irony is that while men may think they are avoiding one type of scandal, could find themselves facing another: Discrimination complaints.

“If men avoid working or traveling with women alone, or stop mentoring women for fear of being accused of sexual harassment, those men are going to back out of a sexual harassment complaint and right into a sex discrimination complaint,” Stephen Zweig, an employment attorney with FordHarrison told Bloomberg.

Not all men are responding to the #MeToo movement by fearfully cutting themselves off from women, however. “Just try not to be an asshole,” one said, while another added: “It’s really not that hard.”

It might not be that simple, however. It seems there is no escape from the grip of the #MeToo movement. One of the movements most recent victims of the viral hashtag movement is not a man, but a song — the time-honored classic ‘Baby It’s Cold Outside’ — which is being banished from American radio stations because it has a “rapey” vibe.