The pieces have been moving into place for months now.  German Chancellor Angela Merkel has seen her power within German political circles wane for more than a year.  Italy’s opposition to the European Union’s budget rules is stiffening.

Bond yields are beginning to not just rise, but blow out uncontrollably.

The Fed keeps raising rates to arrest inflation not supported by increased wages.

Brexit talks are at a standstill.

Last week Merkel suffered what could easily be her most important political defeat over the past two years.  She lost a parliamentary vote for her candidate in an internal vote of her Christian Democratic Union (CDU) party.

As pointed out by Alex Mercouris at The Duran, this is the first time in more than forty years a German Chancellor lost an internal party vote of this magnitude.  And it speaks to the growing frustration among not only party members but the German electorate in general.

I saw a recent poll from Die Welt which has Alternative for Germany (AfD) creep past Merkel’s Grand Coalition partner, the Social Democrats (SPD), and challenge the CDU itself.

Because when you back out the Christian Social Union’s (CSU) total which runs between 8% and 9% AfD is now in a position to become the party with the highest backing in Germany.  And this is happening on the eve of Bavarian State elections this month. 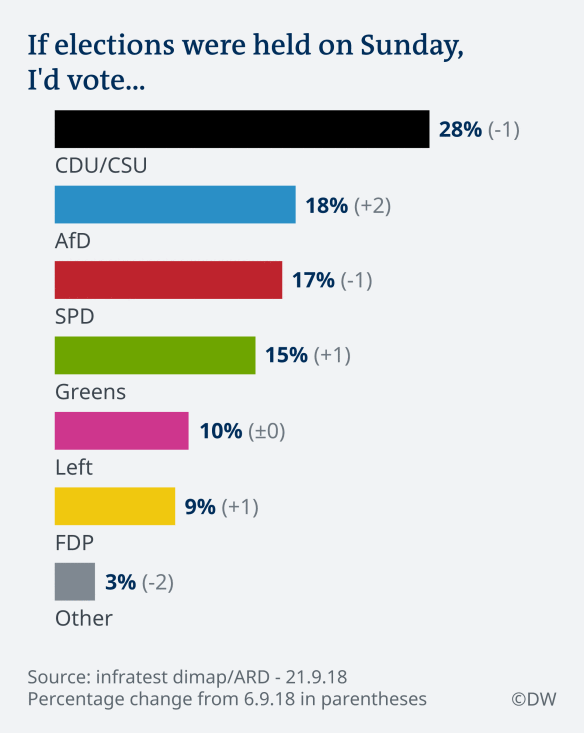 So, CDU party members are in an absolute panic over these numbers.  They are reaching levels which can see a major party become a minor one very quickly.  Don’t believe me?

Ask the Democrats in Italy.

What Alternatives for Germany?

I’ve talked about AfD’s chances to…