A Somali detainee at Guantánamo Bay has accused guards at the high-security Camp 7 of using “mental torture” against inmates. He testified as a witness in a case against inhumane treatment at the US facility in Cuba, backing up claims by another inmate.

“They have mental torturing in the Camp 7,” Guleed Hassan Dourad said at a pretrial hearing for Yemeni defendant Ramzi Bin al-Shibh, according to Reuters.

Guleed described vibrations in his cell floor, a constant “stinky smell” and noises that sounded “like someone on the roof… hitting hammer.”

“I experienced noises, smells, and the vibrations [in the cell]…That’s what made me come here [to court] to testify that we have mental torture in Camp 7,” Sputnik news agency cited him as saying.

Prosecutor Edward Ryan has accused Guleed of lying and questioned his disciplinary record.

“Do you remember the time you spit out a food tray slot at a guard?” asked Ryan. “Yes, I did,” Guleed replied. “If you were there in the camp, you would do the same.” 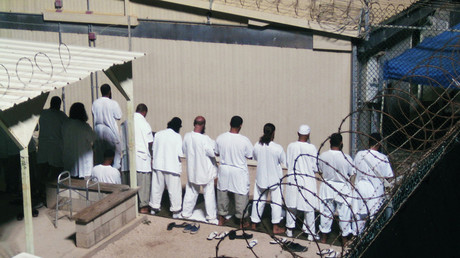 Guleed has been held at Guantánamo for nine years and nine months, but has never been charged. The Somali national spent most of that time at Camp 7, a high-security unit holding CIA-captured prisoners, where he was moved in 2006. The unit is run by a secret US Army unit called Task Force Platinum and has been accused of abuse and torture against inmates.

Now, Guleed is one of the witnesses in the case of Bin al-Shibh, one of the five defendants in the 9/11 war crimes case, who has long been accusing Guantánamo guards of subjecting his cell to constant noise and vibration.

In his testimony to the military tribunal, Bin al-Shibh described what he said were methods of sleep deprivation, meant to keep inmates tired and disoriented. His testimony largely mirrors the practice that some Gitmo detainees were allegedly subjected to as part of the CIA interrogation program.

At that hearing, Bin al-Shibh specifically named Abu Zubaydah as a possible witness who would be able to back up his allegations.

Zubaydah, a Saudi-born Palestinian, was expected to testify along with Guleed, making his first public appearance since his 2002 brutal capture in Pakistan. However, his testimony has been postponed over concerns that he might reveal sensitive information.

Since being turned over to US custody, Zubaydah himself was subjected to 83 waterboarding sessions – a torture technique akin to drowning – was placed in a coffin-sized box for a total of 266 hours (11 days, two hours) over a 20-day period, and forced to sit in another small confinement box 21 inches wide by 2.5 feet long for 29 hours.

His harsh treatment by the CIA prompted the agency’s officers to request that Zubaydah “remain in isolation and incommunicado for the remainder of his life,” meaning he would not be able to recount it, according to the Senate intelligence committee report on torture.