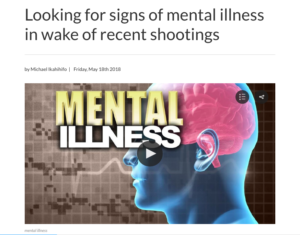 A local Texas CBS station published an article (5/18/18) warning of “signs of mental illness” in the wake of the Santa Fe shooting, but stated that that shooter’s mental state was “unknown.”

After the May 18 mass murder at a high school in Santa Fe, Texas, a local CBS station (5/18/18) published an article headlined, “Looking for Signs of Mental Illness in Wake of Recent Shootings.” It described the Santa Fe shooter, Dimitrios Pagourtzis, as a “person who kept to himself,” citing this trait as a possible warning sign of mental disorder.

A day later, NPR (5/19/18) attempted to piece together bits of information about Pagourtzis, calling into question his mental state, quoting one student:

I don’t think he was normal…. I think he was really strange and quiet. I wasn’t surprised when I heard it was him…. He always wears this weird trenchcoat and kind of looks like a psychopath.

Descriptions of the Santa Fe shooter as a deranged social outcast in a trenchcoat flooded headlines. A New York Times article (5/18/18) led with, “Dimitrios Pagourtzis was seen entering the low-slung building at Santa Fe High School on Friday morning, armed and wearing a trenchcoat.”  CNN (5/21/18) began an article, “The teenager accused of carrying out the mass shooting at Santa Fe High School on Friday was known as a quiet student who often wore a trenchcoat to school,” while the Washington Post (5/18/18) published a piece headlined, “Alleged School Killer Dimitrios Pagourtzis had a Fondness for Trenchcoats and a Growing Darkness.” 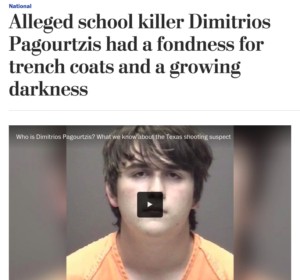 Though painted as an outcast, a brooding, troubled teenager and even a “psychopath,” Pagourtzis has no history of mental illness. In fact, most perpetrators of mass shootings don’t.

A study that analyzed 235 mass killings in the US between 1913 and 2015 found 22 percent of perpetrators demonstrated signs of  mental illness. An American Psychiatric Association study from 2013 notes only 1 percent of yearly gun-related homicides are carried out by people with mental illness (New York Times, 2/16/18).

Stephen Paddock, who killed 59 people at a Las Vegas concert, had no history of mental illness. Even an autopsy of Paddock’s brain revealed nothing of note. But the Washington Post (10/2/17) quoted the Las Vegas Metropolitan sheriff saying, “I can’t get into the mind of a psychopath.” 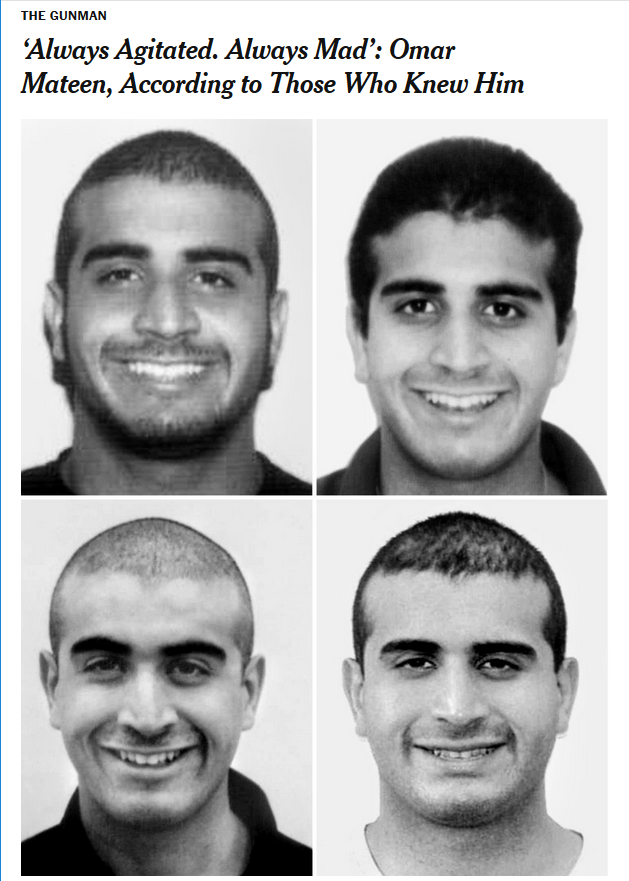 After the Pulse Nightclub massacre, the New York Times (6/18/16) focused on “hints of a disturbed mind” while publishing smiling portraits of the killer.

The word “psychopath” is also thrown around in the case of the Orlando Pulse nightclub shooter Omar Mateen. CBS (6/11/17) published an account that described Mateen as a “psychopath with a rifle.” The New York Times (6/18/16) ran an article full of smiling photos, childhood portraits and selfies, that described Mateen as “always agitated, always mad,” “a difficult student” and having “hints of a disturbed mind.” Mateen was never diagnosed with mental illness.

When mental illness is a possible part of the equation, media often stress that aspect over other compelling narratives. Dylann Roof, the white supremacist who murdered nine African-American churchgoers in Charleston is likely mentally ill, according to psychiatric evaluations, despite refusing to reveal psychiatric information in court. With this potential illness available as a ready explanation, much of the media failed to examine the impact of his racist worldview, and the far-right websites that inculcated it, on his violence (Slate, 6/20/15). The New York Times (7/16/15) outlined his troubles at home and school, and Fox News (6/22/15) questioned, “Why Didn’t Anyone Help Dylann Roof?” The fact is that Roof did have help in developing an ideology in which murdering African-Americans to spark a race war made sense, but with a pat psychological interpretation (possibly) available, there was no need to explore the social context of his crime.

The damage of stigma

The implication that mass shooters are generally mentally ill—and the desire to portray them as such, even when they are not—is not only inaccurate, but also damaging to the vast majority of people with mental illness who are nonviolent.

The American Journal of Psychiatry (5/1/13) examined the effects of news media messages about mass shootings on mental illness stigma. It found that compared to a control group, those who viewed a story about a mass shooting reported heightened negative attitudes toward persons with serious mental illness, perceiving them as more dangerous.

A 2013 poll by the Henry J. Kaiser Family Foundation found that 41 percent of Americans would be uncomfortable working with someone with mental illness. The National Alliance on Mental Illness notes that when stigma like this leads to lack of treatment, it can lead to other medical conditions, a higher chance of dropping out of school and an increased risk of suicide.

A desire for notoriety 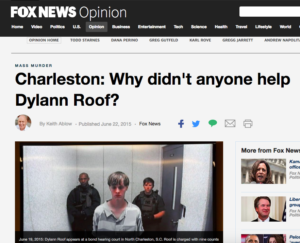 Fox News (6/22/15) said paranoia, depression and self-loathing can lead people to adopt “bizarre beliefs” like white supremacy. Another thing that can lead to such beliefs: watching Fox News (FAIR.org, 12/22/15).

The media’s fixations with Pagourtzis’ trenchcoat and withdrawn personality come from common fallacies about the Columbine High School massacre of 1999. The perpetrators of that crime were falsely reported to be part of the “Trenchcoat Mafia,” a clique of gamers and outcasts at the school who were not affiliated with the shooters. Social awkwardness and duster coats have been associated with mass shootings ever since.

What the Columbine shooters, Pagourtzis and other mass killers most importantly have in common, though, is a desire for notoriety. According to an affidavit (AP, 5/19/18), Pagourtzis told investigators he spared the lives of students he liked so they could “tell his story.”

A New York Times article (5/30/18) outlined the contagious effect the notoriety of Columbine has on school shooters today:

The role of the media in turning school gunmen into household names and perpetuating “the infamous legacy they desire” can be shown to have inspired additional attacks, researchers at Western New Mexico University reported recently. There have been growing calls for withholding the names and biographies of school gunmen from newspaper and television coverage.

The article went on to acknowledge that the Times regularly profiles mass murderers. Articles displaying shooters’ mugshots, speculating about their mental health and providing biographical details are not only plentiful at the Times, but throughout media. After the Parkland shooting, the news dove into the topic of Nikolas Cruz’s “troubled past” and history with mental illness. 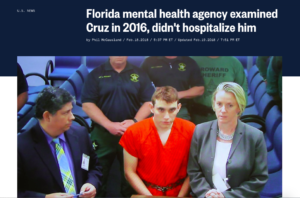 An NBC article (2/18/18) featuring a photo of Cruz outlined how the shooter was nearly hospitalized for mental health issues in 2016 after cutting himself and displaying hate symbols on his bookbag (as if racism is a side-effect of mental illness, and self-harm is a sign of homicidal desires). A Newsweek piece (3/18/18) did the same.

The New York Times (5/30/18) described Cruz as “a 19-year-old with a history of mental health and behavior problems,” before summarizing his video manifesto, in which he declared—referring to the rifle that he would use in his murders—“With the power of the AR, you’ll all know who I am.”

With media digging through his past and medical history, Cruz got his wish.

Could it be media would prefer to scour for evidence of a shooter’s mental illness or report on his dysfunctional past, rather than address what their own role could have been in encouraging killers, through being the very channel by which their “story” is told? If journalists blame some vaguely defined, catch-all category of mental illness for these crimes, or at least imply it is partially responsible, they don’t have to address how their widespread coverage could be a contributing factor (FAIR.org, 10/2/15).

According to an estimate by Duke University professor who studies the relationship between violence and mental illness, if we were to cure everyone with schizophrenia, bipolar disorder and depression overnight, the amount of mass shootings in America would only decrease by 4 percent.

If we were to stop giving shooters the spotlight, though, the number of mass shootings is likely to decrease greatly, according to a study in American Behavioral Scientist (9/5/17). It cited another study in the same journal (11/2/17) that found at least 32 attackers identified the Columbine shooters as role models, with eight identifying the Virginia Tech shooter as a role model.

Though mental illness plays a role in some mass shootings, media coverage plays some role in all of them.