A group of white supremacists who, according to prosecutors, plastered “threatening” racist stickers around a university campus in Birmingham and performed Nazi salutes have been convicted of inciting racial hatred.

The four extremists were caught on CCTV plastering Aston University in July 2016 with slogans reading “Britain is ours- the rest must go.” One of the stickers, branded by prosecutors as “threatening, abusive or at very least insulting,” also bore a picture of a white figure performing the Nazi Salute with the caption: “White Zone – National Action,” a reference to the neo-Nazi group banned under anti-terror legislation. 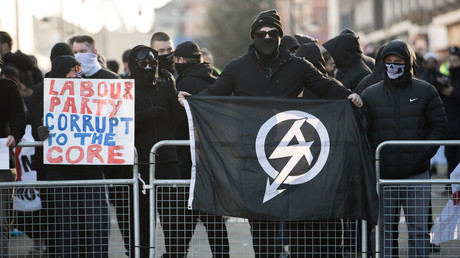 The men then stood for a souvenir-style photo in front of the university with the far-right group’s black flags. Two of the group then performed a Nazi salute.

Birmingham Crown Court heard the paraphernalia was used as a recruitment tools for National Action, which was proscribed by former Home Secretary Amber Rudd in December 2016. The stickers prompted a hate crime investigation after being discovered by staff two days after being put up.

The group also bragged at a pub about how the slogans had offended “butt-hurt students, sub-humans, and traitors”.

A day after the stickers went up, a message appeared on the Twitter account of the group’s regional arm stating: “The fashy goys of National Action have hit Aston University campus”.

Chad Williams-Allen, 26, from West Bromwich and Gary Jack, 22, from Shard End, are due to be sentenced alongside two fellow defendants who cannot be named for legal reasons.

The court heard Williams-Allen – whose messages and notebook entries contained sentiments against multiculturalism, the Jews and racial slurs – sent an image of the NA sticker on encrypted chat app Telegram and wrote: “Been taking the long route home through paki land and slapping these everywhere.”

“Back in brum – disgusting n*****s and pakis everywhere,” another message read.

Detective Chief Superintendent Matt Ward, who heads the West Midlands Counter Terrorism Unit, said: “We are committed to tackling all forms of extremism which has the potential to threaten public safety and security.”

The men will be sentenced on June 1.