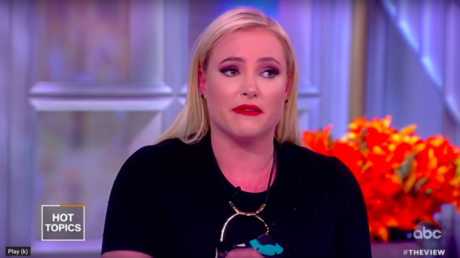 Meghan McCain’s angry, teary tirade on The View over “scary” anti-Semitism has sparked an outpouring of mockery and criticism online, with some going so far as to call it the “single dumbest thing” on TV.

McCain’s performance was part of a heated segment of The View devoted to this week’s political storm over Ilhan Omar’s comments about Israel’s place in US politics and the Democrats’ resolution condemning anti-Semitism that followed her remarks.

“This issue is a really intense one for me,” McCain said before making her first point about not politicizing the issue by drawing comparisons between Charlottesville white supremacists, “saying ‘Jews will not replace us’” and Omar, accusing her of “dog-whistle moments.”

The daughter of the late Republican Senator John McCain grew visibly irritated as other panelists spoke, and a little catty as she tried to interrupt Sunny Hostin, who questioned whether Omar’s criticism of Israel is anti-Semitic and spoke about her Jewish grandfather. “Are you comfortable with me speaking now?” McCain asked. “Are we comfortable with me rebutting now?”

Meghan McCain using white crocodile tears to portray Ilhan Omar as “scary” and speak over an ethnically Jewish woman who disagrees with her is the most on-brand Christian Zionist thing ever https://t.co/qQkmWOK2OS

McCain explained she “would go so far as to say I probably verge on being a Zionist as well,” and said that while she doesn’t have Jewish family, former Congressman Joe Lieberman and his wife Hadassah Lieberman are like her family.

“I take the hate crimes raising in this country incredibly seriously, and I think what’s happening in Europe is really scary and I’m sorry if I’m getting emotional.” she said. “What Ilhan Omar is saying is very scary to me and a lot of people and I don’t think you have to be Jewish to recognize that.” she added.

Many took issue with McCain’s teary reaction, accusing her of ‘crocodile tears’, with a number of Jewish people expressing displeasure at McCain’s emotions on their behalf.

The only thing that truly made @MeghanMcCain cry was a Muslim woman of colour. Period. Everything else is filler. You can’t expect any more from the daughter of a “bomb bomb Iran” war monger who got rich through genocide.

meghan mccain will never, could never, is not PERMITTED to speak for jewish people. we don’t want you or your “zionism” (wtf) and we certainly don’t want your teary, hideous islamophobic bullshit. speak for yourself, and then work on yourself, babe.

.@MeghanMcCain is a Christian Zionist – an ideology that sees Jewish immigration to “Israel” as a precursor to the rapture, in which Jews who don’t accept Jesus burn in hell for eternity. Her teary-eyed display of philo-semitism is actually anti-semitic. https://t.co/0aDLsEBVxY

People were quick to point to a number of “scary” and sad instances taking place in Palestine at the hands of Israel.

Non-Jewish woman uses white tears to attack a Black woman for speaking out in support of Palestinians fighting against apartheid https://t.co/uFbhKdFqTC

Meghan’s late father literally sang ‘bomb bomb bomb Iran’ and insisted on referring to his Vietnamese captors as ‘gooks’. He also, lest we forget, gave the world Sarah Palin.

So a little less faux outrage over a former refugee-turned-freshman-representative pls. https://t.co/zH6VZxBYc4

Many reminded her of the “scary” things her own father, the late John McCain, had been responsible for, including arguably anti-Semitic actions and repeated references to Vietnamese people as “gooks.”

remember when John McCain made Fred Malek national finance co-chair of his 2008 campaign—a man best known for literally counting Jews at the bureau of labor statistics on orders from Nixon b/c Nixon thought a “Jewish cabal” was doctoring employment numbers https://t.co/Mf2mSO5NB2https://t.co/VatZGg4mdL

As Meghan McCain fake cries about Ilhan’s rightful critique of Israel and AIPAC, here’s a photo of her dad with a Ukrainian neo-Nazi when her dad was supporting a right wing coup in Ukraine. pic.twitter.com/gnhy91OSz3

I wonder if Meghan McCain cried when her dad used the term “gook,” which he openly refused to stop doing. I think that term may be triggering to some people. Especially since he, like, helped kill them.

Children should not have to answer for the mistakes of their parents, but Meghan McCain has cheered on every single destructive policy of her father’s. Has she once cried for the civilian victims of John McCain’s warmongering? https://t.co/pbGFZZ3hp1