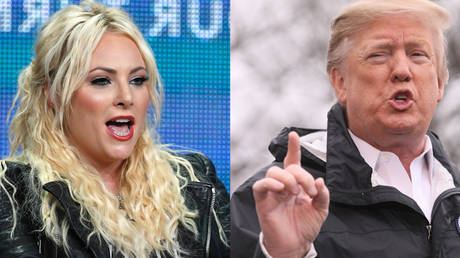 President Donald Trump and Meghan McCain – daughter of late Senator John McCain – got stuck into a fresh verbal brawl, after Trump hounded the dead senator for voting against repealing Obamacare and spreading rumors about him.

When alive, McCain was one of Trump’s fiercest Republican critics. The late lawmaker dedicated a portion of his final book, ‘A Restless Wave’ to speculating whether Trump hired Russian prostitutes to urinate on him in a Moscow hotel – as alleged in a now infamous dossier of unverified information gathered by opposition research firm Fusion GPS at the behest of the Clinton campaign.


Even since McCain’s death in August, Trump hasn’t forgotten his old nemesis.

Spreading the fake and totally discredited Dossier “is unfortunately a very dark stain against John McCain.” Ken Starr, Former Independent Counsel. He had far worse “stains” than this, including thumbs down on repeal and replace after years of campaigning to repeal and replace!

Meghan McCain shot back. “No one will ever love you the way they loved my father,” she tweeted. “I wish I had been given more Saturday’s with him. Maybe spend yours with your family instead of on twitter obsessing over mine?”

No one will ever love you the way they loved my father…. I wish I had been given more Saturday’s with him. Maybe spend yours with your family instead of on twitter obsessing over mine? https://t.co/q7ezwmHiQ4

With round one finished, Trump threw another punch on Sunday, this time slamming the late McCain for his role in forwarding the so-called ‘Steele Dossier to the FBI and the media, part of a series of events that would go on to kickstart the still-ongoing ‘Russiagate’ investigation. “Even the Fake News refused this garbage!,” he tweeted.

So it was indeed (just proven in court papers) “last in his class” (Annapolis) John McCain that sent the Fake Dossier to the FBI and Media hoping to have it printed BEFORE the Election. He & the Dems, working together, failed (as usual). Even the Fake News refused this garbage!

“My father lives rent free in your head,” Megan McCain replied, in a since-deleted tweet.

The animosity between Trump and the McCains is a two-way street. Shortly before his death, Senator McCain excluded the president from his funeral. On the day of the service, Trump remained in the White House as former Presidents Obama, Bush Jr. and Clinton attended as normal. In a speech eulogizing her father that day, Meghan McCain threw jabs at Trump.

“We gather here to mourn the passing of American greatness,” she said. “The real thing, not cheap rhetoric from men who will never come near the sacrifice he gave so willingly, nor the opportunistic appropriation of those who lived lives of comfort and privilege.”