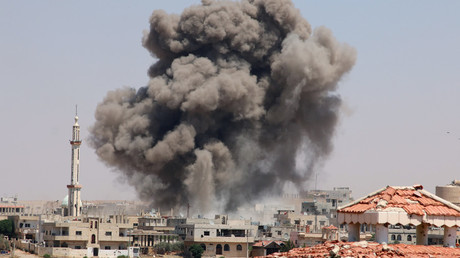 Since rumblings late last week that Theresa May was likely to authorize British military intervention in Syria, numerous MPs have spoken out in support of the PM – but is there a whiff of hypocrisy in the air?

The former Labour Friends of Israel chair has been supportive of May’s decision to launch airstrikes in Syria, highlighting the need to remove the alleged threat of chemical weapons attacks on the civilian population.

In a tweet on Saturday, Woodcock told his followers that the UK was right to join forces with the US and France in Saturday’s airstrikes in Syria, saying: “It was right that the UK joined our allies in action to degrade Assad’s chemical weapon capability in Syria – we must act together to remove the threat of these dreadful weapons that indiscriminately slaughter civilians.”

It was right that the UK joined our allies in action to degrade Assad’s chemical weapon capability in Syria – we must act together to remove the threat of these dreadful weapons that indiscriminately slaughter civilians.

However, Woodcock’s humanitarianism doesn’t seem to stretch north of the Syrian border. Take his support for Turkish leader Recep Tayyip Erdogan, who himself is prone to military intervention in Syria. In January, Turkey launched ‘Operation Olive Branch’ against the Kurds in Afrin, and the assault has resulted in over 500 civilian deaths, according to the Syrian Civilian War Map site.

Woodcock has, however, remained silent on those civilian deaths. Rather than speak out against the Erdogan government in the past, Woodcock has instead praised it. In a December 2017 interview, published in the Daily Sabah, a Turkish pro-government newspaper, the MP said he hopes that Turkey “feels able to come out of its state of emergency as soon as possible so that you can better project the plurality and the tolerance and the progressive changes that are happening right now in your country without the response to the security threat you are facing at the moment.”

Woodcock has recently returned from Riyadh, Saudi Arabia, where he was there to learn more about the kingdom’s operations in Yemen. He tweeted some pictures of his little adventure.

By chance we were just returning from Saudi border town Najran where we saw the damage being done to homes and schools by the Houthis Iranian-made missiles pic.twitter.com/4BCkUL0BWA

Woodcock was one of around 100 Labour MPs who were missing or who deliberately abstained from the vote to withdraw support for the Saudi-led military intervention in Yemen, which has seen the death toll rise to 10,000, according to the UN.

Tory MP Johnny Mercer during this week’s ‘War Powers Act’ debate insisted that he backed the PM’s decision to authorize airstrikes in Syria based on his experience in the armed forces and to protect the citizens of the UK.

Today’s debate actually reinforced the case for never making binding decisions about military actions in Parliament. And accusing the PM of doing it other than anything in line with British Interests? Grow up. pic.twitter.com/qQIiNWdfif

He went on to suggest that allowing Parliament to debate whether the country should engage in imminent military action would make the UK less safe, saying that “inaction while Syria burns is not acceptable.”

So Mercer is seemingly concerned about “Syria burning” yet is silent when it comes to civilian casualties in Yemen and Gaza? Furthermore, he voted against Labour’s motion to stop UK support for Saudi Arabia’s campaign in Yemen. The actions of a man concerned about human life?

Austin famously heckled Jeremy Corbyn during the Labour leader’s speech on the Iraq war upon the publication of the Chilcot report, telling him to “shut up” and shouting “you’re a disgrace.” Austin has been an advocate for military strikes against Assad’s Syrian government since as early as 2013. He publicly revealed his regret that the UK government didn’t win a vote back in 2013 to militarily intervene in Syria. Tweeting earlier this year, he said: “Maybe we need a Chilcott-style inquiry on our 2013 failure to prevent the carnage?”

Read @Freedland explain why silence on Syria makes us complicit: Assad’s Govt “pounded rebel-held area so hard that it killed 194 people in 40 hours, many of them children”
Maybe we need a Chilcott-style inquiry on our 2013 failure to prevent the carnage? https://t.co/YobjWSZwqb

Austin is an MP so concerned with human rights that he joined Woodcock in abstention on the Saudi arms deal vote. Clearly the calls to suspend sales made by the UN secretary general, Save the Children, Amnesty International, and Human Rights Watch are apparently not enough for Austin to stop his backing of Saudi Arabia in the war in Yemen.

According to a Labour Party source close to media news outlet the Skwawkbox, Austin is content to see Saudi Arabia continue its bombing campaign in Yemen.

“Ian Austin would personally drop the bombs on Yemen himself if you gave him a chance. If the devil is ever on leave Austin subs for him.”

The former defence secretary was famously ambushed by Shadow Foreign Secretary Emily Thornberry, when she revealed that in May 2007 Fallon was reportedly in Syria at a reception to celebrate the re-election of President Assad.

In December 2016, Fallon defended Britain’s support for Saudi Arabia over its use of cluster bombs in Yemen, insisting there was no breach of international law because they were used against “legitimate military targets.”

The moral relativism shown by MPs knows no bounds; in one breath they decry humanitarian abuses, while in the next they obfuscate on those committed by allies.