In December, President Donald Trump said that he planned to withdraw the US troops from Syria, which number between 2,000 and 4,000. Trump’s claim was widely condemned in corporate media, demonstrating the commentariat’s shared belief in American benevolence toward other peoples, in Washington’s alleged right and duty to decide other countries’ fates, and in the forever war the US supposedly has to wage in the Middle East.

One consistent theme in the coverage was the view that US troops need to stay in Syria because ISIS still exists. Another is that US forces must remain there because the governments of Russia, Syria and Iran want the US to leave. 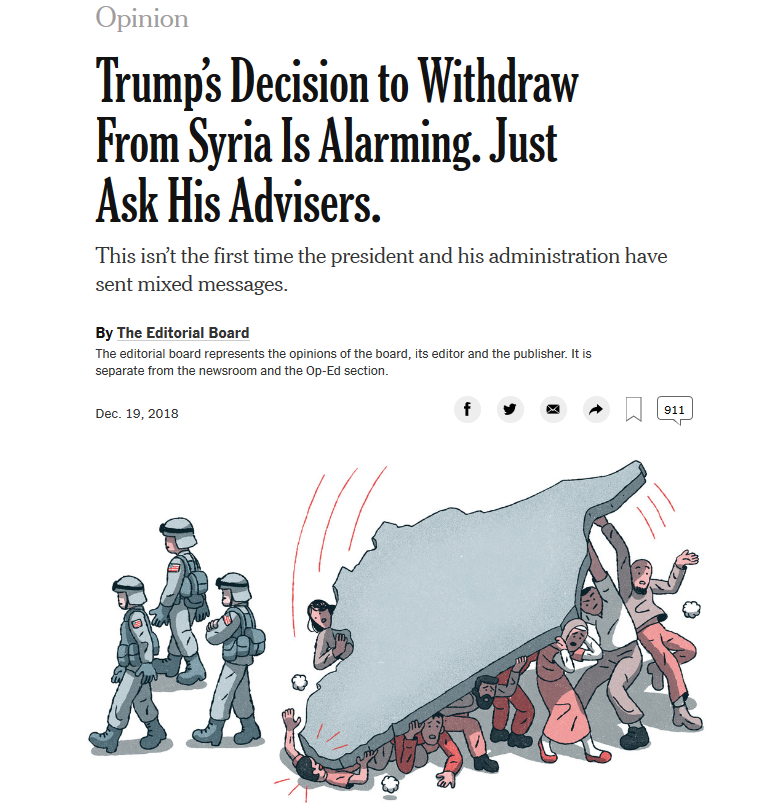 A New York Times editorial (12/19/18) said it would be “dangerous” for the US to withdraw from Syria. “No one wants American troops deployed in a war zone longer than necessary,” the editors claimed. The paper endorsed the perspective that “the job” of fighting ISIS “is not yet done,” going on to write that

an American withdrawal would also be a gift to Vladimir Putin, the Russian leader…. Another beneficiary is Iran, which has also expanded its regional footprint.

According to this view, the US should get out of Syria once a US presence there is no longer “necessary,” but it’s “necessary” until some unspecified benchmark for annihilating ISIS has been reached, and never mind the costs to Syria: A US-led bombing ostensibly aimed at ISIS leveled Raqqa, a major Syrian city,  killing and injuring civilians en masse in what former Defense Secretary James Mattis called a “war of annihilation.”

It’s also apparently “necessary” to stay until Syria has a government that is not allied with Russia or Iran, even though in practice this pursuit has contradicted the goal the editors just outlined, eliminating ISIS: US efforts to help bring down the Syrian government of President Bashar al-Assad, as well as the US invasion of Iraq, helped create the conditions for the emergence of ISIS in Syria.

What the authors are suggesting is that the US should maintain an illegal presence in Syria until the Syrian government has been overthrown and replaced with one that has partnerships to which the US assents. Because all evidence suggests that Russia will fight to keep its Syrian partner in power, in practical terms the authors are arguing that it’s “necessary” for the US to occupy Syria forever, or until the US fights World War III with Russia. 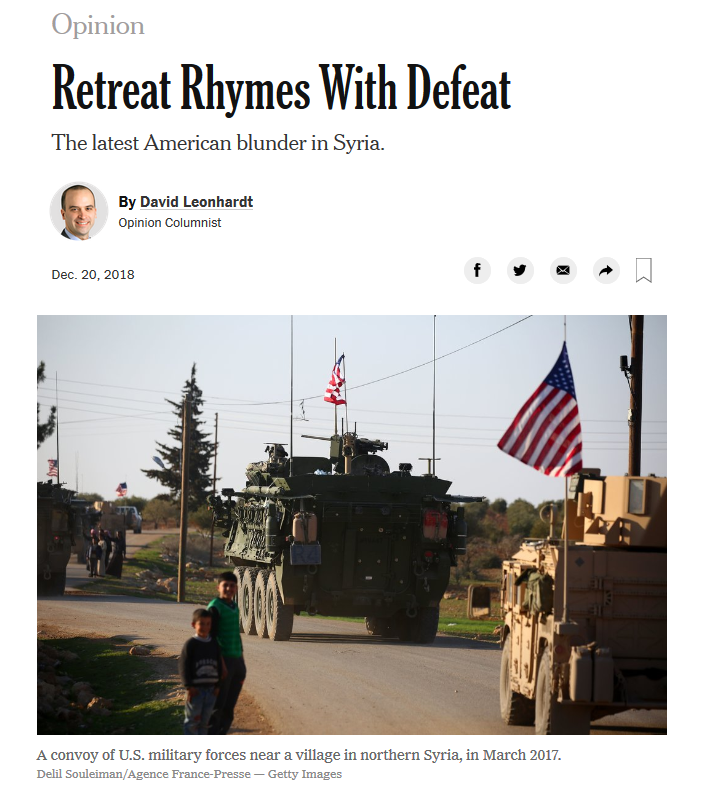 David Leonhardt (New York Times, 12/20/18) frames a withdrawal of US troops from Syria as a “gift” to Vladimir Putin.

In an article headlined “Retreat Rhymes With Defeat,” the Times’ David Leonhardt (12/20/18) argued that the US needs to stay in Syria because Islamic State fighters are reportedly still in the country, and echoed the view that a US pullout of Syria would be “‘the greatest gift’ that Trump has so far given to Russia”—a reference to the conspiracy theory that Trump is a Russian tool—because a US drawdown would benefit the Russian-allied Syrian government. Like Times editors, Leonhardt argued the US should stay in Syria not only until there are no ISIS fighters left in the country, but also until the Syrian government is replaced with one that is not partnered with Russia.

But, again, US efforts to broker regime change in Syria were a cause of ISIS becoming a powerful force in the country: The UK-based Conflict Armament Research found that the US had been supplying arms to insurgents opposed to the Assad government since at least 2012, and when ISIS began rapidly seizing territory in 2013 and 2014, many US-armed rebel groups were either defeated by the incoming militants or joined them. As ISIS took nearly half of Syria, the US continued to train and equip Syrian rebels, using allies like Jordan and Turkey as intermediaries.

Similarly, a Washington Post editorial (12/19/18) headlined “This Is Not the Way to Leave Syria” complained that “the Syria withdrawal hands Tehran and its ally Russia a windfall.” This suggests that the editors believe “the way to leave Syria” is with a new government approved by the US in place, or at least with the current one ousted—a gambit that the US last pulled off in Libya, a country that now has slavery, with some slaves reportedly having their organs harvested and sold.

The Post’s Max Boot (12/19/18) claimed that Trump’s supposed plan to get US troops out of Syria amounted to “handing a Christmas present to the mullahs”—“the mullahs” being a lazy, orientalist shorthand for the Iranian government used by people who know little about the country. The author has so internalized imperialist ideology that he thinks the US has a right to indefinitely control one-third of Syria, including half of its energy resources and much of its best agricultural land, because it could benefit Iran if the US did not do that. 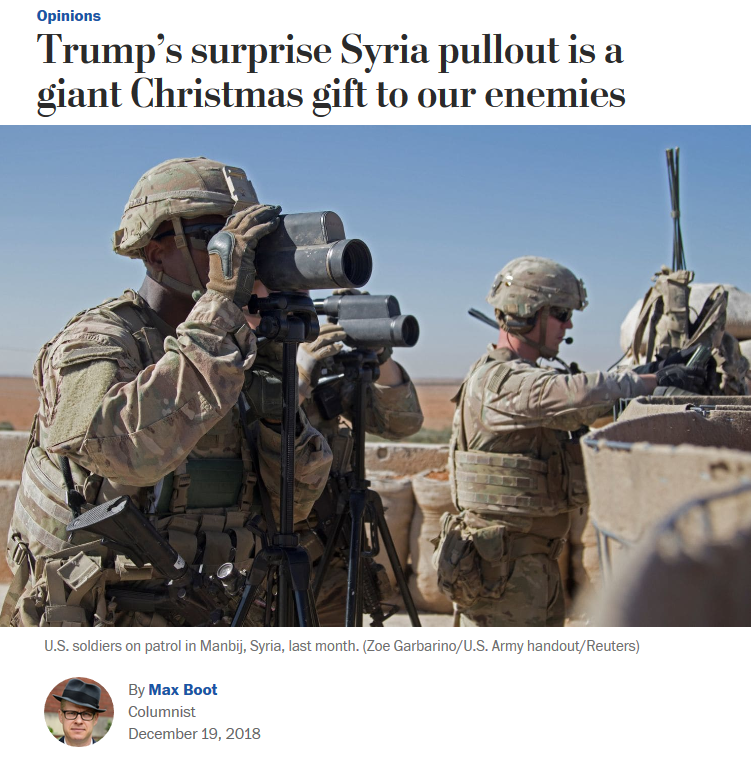 Max Boot (Washington Post, 12/19/18) complains that “when presidents normally ‘wag the dog,’ they start a war.”

Much of the coverage complained that the US pulling out of Syria would be bad for Israel, in that Iran will likely retain influence in Syria. “The American withdrawal worries Israel,” said the Times’ editorial. Trump “promised to protect Israel, but that nation will now be left to face alone the buildup by Iran and its proxies along its northern border,” the Post’s howled. “So much for Trump’s conceit that he is the most pro-Israel president ever,” Boot moaned, going on to write that

A US withdrawal from Syria will entrench the Islamic Republic of Iran on Israel’s doorstep. That damage vastly outweighs the empty symbolism of moving the US embassy to Jerusalem.

Whatever these pundits’ delusions, the Israeli state is not some kind of vulnerable minority that needs to be protected from violence; it is a nuclear-armed perpetrator of extraordinary violence—against the Palestinians, of course, and also against states in the region, including Syria.

US media say they are concerned that Turkey will attack the Syrian Kurds, and that the US should stay in Syria to protect them. The Times wrote that “Among the biggest losers” of an American pullout

are likely to be the Kurdish troops that the United States has equipped and relied on to fight the Islamic State in Iraq and Syria. Turkey’s president, Recep Tayyip Erdogan, considers many of the Kurds to be terrorists bent on destroying his country.

For the Post, “The Syrian Kurdish forces . . . will be perhaps the foremost victims of Mr. Trump’s decision. Betrayed by Washington, they will now be subject to a military offensive by Turkey.” Boot said that “America’s Kurdish and Arab allies in the Syrian Democratic Forces will be hard-put to resist [ISIS] on their own, much less deal with the Turkish threat against the Kurds.”

It is true that Turkey poses a threat to Kurdish people, and the risks facing Kurds merit concern, but the analysts mislead readers by suggesting a US occupation of Syria is the answer. The US military’s function is not to protect civilians—just the opposite, in fact. And a US presence in Syria has not kept the Kurds safe from Turkey: Turkey, along with armed groups opposed to the Syrian government that the US supported, ransacked Afrin, a Kurdish-majority territory in northern Syria, plundering the area and driving out 220,000 civilians. Moreover, throughout the 1990s, the US directly participated in Turkey’s mass killing and oppression of Kurds in Turkey.

The prospect of the Syrian Kurds making alliances with local forces that could result in protecting them from Turkey, as the Kurds appear to have done with the Syrian government, is a part of the story these pundits don’t think their readers need to hear about. None of these commentators who are professing concern for the welfare of Kurdish people consider the possibility that the only long-term way to ensure the safety and prosperity of the Kurds, and every other ethnic and confessional group in West Asia, might be a comprehensive, region-wide solution that necessarily entails upending the US-dominated order, replacing it with local self-rule. At no point do any of these articles consider the radical notion that the US has no right to determine Syria’s affairs, or those of any other country. 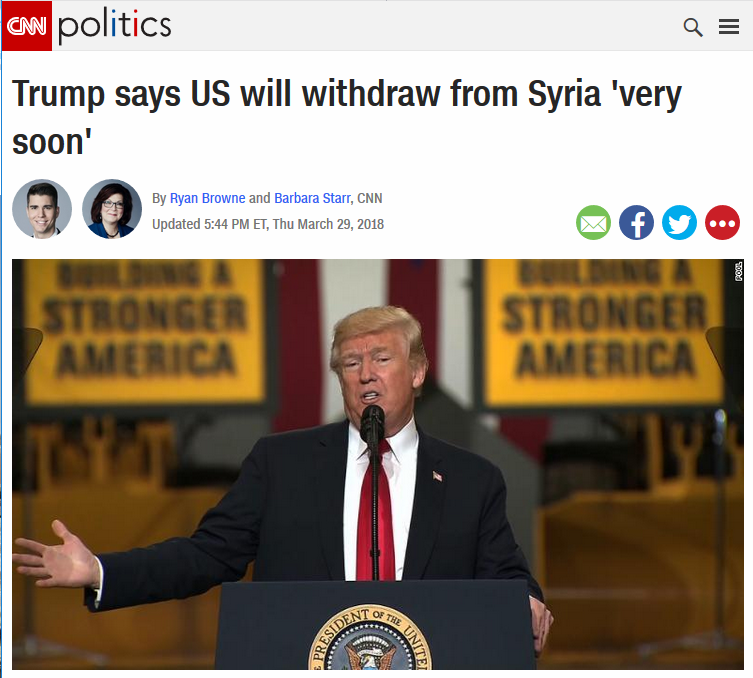 There is ample reason to doubt that Trump will actually withdraw from Syria entirely. Trump said he would remove the troops in March 2018 (CNN, 3/29/18) and didn’t follow through, and the administration is again sending mixed signals. National Security Advisor John Bolton said that American forces will “eliminate what remains of ISIS before leaving,” “there is no fixed timetable for completing the drawdown,” and “some 200 US troops will remain in the vicinity of al-Tanf, in southern Syria, to counter growing Iranian activity in the region.” More recently, the military said that it moving ahead with plans to withdraw all troops, with one Pentagon official saying, “We don’t take orders from Bolton.”

Secretary of State Mike Pompeo said the “US will expel every last Iranian boot from Syria.” Trump himself won’t commit to a date for removing the troops, saying only that this will supposedly happen “over a period of time.” Subsequently, a spokesperson for the US-led coalition against ISIS said it has begun leaving, though it “will not discuss specific timelines,” and Reuters (1/11/19) noted that “residents near border crossings that are typically used by US forces going in and out of Syria from Iraq said they had seen no obvious or large-scale movement of US ground forces on Friday.”

Even if the US were to pull its troops out of Syria, it’s far from certain that this will mean the US will stop meddling. If the US holds on to its bases in Syria, continues to use Syrian air space, or fails to withdraw the more than 5,500 private contractors it has in the country, then that’s not a withdrawal from Syria.

Nor is there reason to believe that US allies will take their hands off Syria: For example, the day after Trump’s announcement, Israeli Prime Minister Benjamin Netanyahu declared that Israel would increase its efforts against Iran in Syria “in a very decisive way and with support and backup from the US”; on Christmas Day, Israel bombed Damascus.

Thus, all of the media’s fretting about a possible scaling back of America’s empire may well have been over nothing.