Reports in US media about President Donald Trump’s plans to fire National Security Adviser H.R. McMaster have prompted the White House to issue a denial. This comes days after Trump fired Secretary of State Rex Tillerson.

On Thursday, CNN and the Washington Post, citing sources with knowledge of the situation, reported that Trump has been actively searching for a replacement for the three-star general. McMaster fell out of favor due to his lack of flexibility and unnecessarily long briefings, two sources told the Post, referring to conversations the president had with Chief of Staff John Kelly. CNN reported that McMaster might be sacked as soon as Friday.

Hours after both reports came out, White House Press Secretary Sarah Huckabee Sanders dismissed them, saying that “contrary to reports” McMaster and Trump “have a good working relationship and there are no changes at the NSC [National Security Council.]“

Just spoke to @POTUS and Gen. H.R. McMaster – contrary to reports they have a good working relationship and there are no changes at the NSC.

Reports have been circulating that more heads could be about to roll in the Trump administration in the near future.
Speaking to reporters on Thursday, Trump, however, dismissed rumors of a major looming shake-up as “very exaggerated.”

“The story was very false. They wrote a story about staff changes today that was very false,” Trump said when asked by a reporter if there were “any more staff changes coming.”
While Trump did not specify what story he was referring to, Fox News published a report on Wednesday, claiming that McMaster, as well as Department of Veterans Affairs Secretary David Shulkin and Chief of Staff John Kelly might be the next to go. 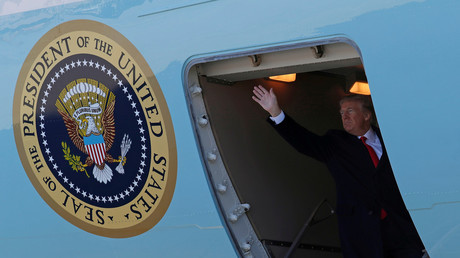 “There will always be change, but very little,” Trump said, without providing further details.

The speculation of a new high-ranking dismissal in the Trump White House comes on the heels of the abrupt ouster of former Secretary of State Rex Tillerson and his looming replacement with CIA Director Mike Pompeo.

Tillerson was reportedly unaware of his firing before he was shown the tweet from Trump announcing his removal. After Tillerson’s aide, former Under Secretary Steve Goldstein, said his boss was surprised by the message and would have liked to stay in office, he was sacked the same day.

For the adherents of the “Trump-Russia collusion” narrative, Tillerson’s sacking was a definite sign that Trump won’t tolerate his people taking a stance against Moscow – which Tillerson did right before he was fired by accusing Russia of poisoning former double agent Sergei Skripal in the UK. What they chose to ignore was that his chosen successor, CIA Director Mike Pompeo, is known for having a much more hawkish stance on Russia.

The pattern was immediately repeated in response to the McMaster firing rumors, with many commentators rushing to look for a Russian trail in the story.

If @washingtonpost is correct that McMaster will be fired, we should all worry, Tillerson & McMaster both made strong statements against Russia, and each would be removed soon after. The administration will again become a nutty palace w/ Mueller investigation closing in

Trump is a traitor to this nation, he is running the U.S. presidency as a subsidiary of Putin’s thugocracy in Russia, and he belongs in prison.

Donald Trump firing H.R. McMaster right after firing Rex Tillerson proves in this administration saying that Russia has done something wrong is the fastest way to lose your job. What does Vladimir Putin have on our President that makes him so protective of the Kremlin?