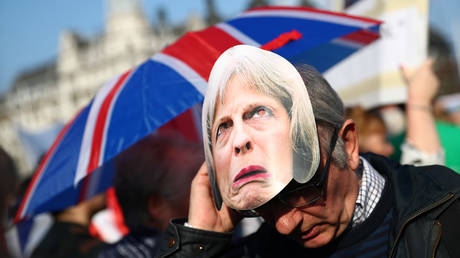 Theresa May’s failure to get her EU withdrawal bill through parliament for a third time led to immediate demands for the prime minister’s resignation, a snap general election, and warnings from the EU about a no-deal Brexit.

May said the consequences of the rejection for Brexit were “grave,” not least for her future as prime minister. After she saw her deal rejected again, this time by 58 votes, Labour leader Jeremy Corbyn said that if she was unwilling to change the deal which she has continuously failed to get through parliament, then she should quit immediately and call a general election to let the country decide.

The Scottish National Party’s parliamentary leader Ian Blackford also responded to May’s failure with an immediate call for an election.

Members of May’s own party are also calling for her head, with the deputy chair of the hardline Tory European Research Group saying she needs to leave Downing Street as soon as possible.

May had promised to quit if she was successful in getting the withdrawal agreement through parliament, which ironically means her failure could see her cling on to her job for a bit longer.


MEPs watching in Brussels were also quick to respond. Warnings of a no-deal exit were soon flooding in from Europe, with the European Commission saying a no-deal scenario on April 12 is now a “likely scenario.”

“No-deal” scenario on 12 April is now a likely scenario. The EU has been preparing for this since 12/2017. Now fully prepared. We will remain united. Benefits of WA, including transition period, will not be replicated in “no-deal” scenario. Sectoral mini-deals are not an option. pic.twitter.com/JJndIjMtTy

In view of the rejection of the Withdrawal Agreement by the House of Commons, I have decided to call a European Council on 10 April. #Brexit