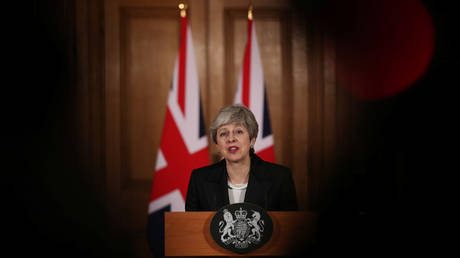 Despite two parliament defeats of her Brexit deal, Prime Minister Theresa May has pressed on with the EU-backed offer, urging MPs to vote for the deal and, in an address to the nation, vowing to “get on with” exiting the union.

“We will now not leave on time with a deal on the 29th of March. This delay is a matter of great personal regret for me,” May said in Downing Street, ruling out any notion of a second Brexit plebiscite.

Reiterating her position, set out earlier in the House of Commons, the Prime Minister said that she had asked President of the European Council Donald Tusk to extend Article 50 up to June 30 to give British MPs the time to make a “final choice,” after two failed votes on her Brexit plan are forcing the country to exit the EU with “no deal.”

Also on rt.com
May asks EU to delay Brexit until June 30, ‘not prepared to delay further’ (VIDEO)


“It is high time we made a decision,” she stressed, accusing her fellow lawmakers of doing “everything possible” to stall the process.

“I am not prepared to delay Brexit any further than the 30th of June,” she stated. “I will continue to work night and day to secure the support of my colleagues … [on] a deal that delivers on the result of the referendum.”

A “short extension” of Article 50 is possible, Tusk hinted on Wednesday – while the president of the EU Commission, Jean-Claude Juncker, stressed that London and Brussels must seal the deal before European Parliament elections on May 23.