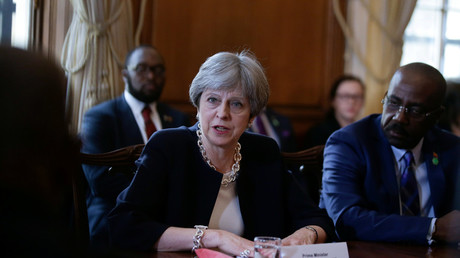 Theresa May is facing renewed accusations of “misleading Parliament” after wrongly blaming the last Labour government for overseeing the destruction of thousands of landing cards belonging to the Windrush generation of immigrants.

RT looks at the current scandal, and asks whether the prime minister has misled Parliament before.

In Parliament on Wednesday, the PM denied any personal responsibility for the scandal that has left thousands of Caribbean migrants fearing for their right to remain in a country whose government had invited them to become British citizens after the Second World War.

In a fiery exchange at PMQ’s, Labour leader Jeremy Corbyn asked the PM: “Yesterday, we learned in 2010 the Home Office destroyed the landing cards for a generation of Commonwealth citizens and so have told people, ‘we can’t find you in our system’. Did the prime minister, the then-home secretary, sign off that decision?”

May replied: “No, the decision to destroy the landing cards was taken in 2009 under a Labour government.”

The Border Agency discussed destroying the #Windrush landing cards in 2009, but the decision to do so was taken in October 2010 when Theresa May was Home Secretary.
So Theresa May was disgracefully duplicitous at #PMQs to blame this on the 2009 Labour government.

However, a spokesperson for No.10 confirmed later that same day that this version of events was not correct, instead transferring the blame to the UK Border Agency (UKBA), saying: “In October 2010, the operational decision was taken in relation to the specific registry slips themselves. The prime minister was not involved in this process, this was an operational decision taken by UKBA.”

So just like the ‘go home or face arrest’ vans not being Theresa May’s fault because she was on holiday, as we have recently learned from her former special adviser, Nick Timothy, so it would seem she had nothing to do with the Windrush scandal. How convenient.

As recently as March, Theresa May was rebuked by the chair of the UK Statistics Authority (UKSA), Sir David Norgrove, for falsely claiming that her government was providing an extra £450 million for local police forces. Responding to Labour MP Louise Haigh’s complaint on the issue, Norgrove said: “In terms of the particular points you make, the prime minister’s statement and the Home Office’s tweet could have led the public to conclude incorrectly that central government is providing an additional £450 million for police spending in 2018/19.”

He went on to clarify that “£270 million of the funding settlement will come from local council tax, if police and crime commissioners and mayors choose to raise these sums.”

The UK Statistics Authority ruled that Theresa May misled the public with claims her Govt are giving police an extra £450 million. Despite that, she repeated the lie in her answer to George Howarth during today’s #PMQspic.twitter.com/dqr2LO5u2z

So there is no guaranteed £450 million going to local police. Furthermore, a large amount of the funding settlement for police forces is dependent on revenue being generated from council tax, not central government. There was no subsequent apology from May for seemingly misleading Parliament and the public.

Homelessness has more than “halved” since peak under Labour in 2003

In late 2017, May was accused of spinning statistics on homelessness rather than understanding and tackling the problem proactively. The UKSA at the time raised concerns over the PM’s proclamation during PMQs that “statutory homelessness peaked under the Labour government and is down by over 50 percent since then.”

While it was true to say that statutory homelessness had peaked under Labour in 2003, it dropped dramatically in the intervening period and has subsequently risen under the Conservatives’ time in office.

Just over 10,000 families were recorded as homeless when Labour left office in 2010. At the time of May’s misleading comments that number was nearly 14,500.

To many this seemed to be a cynical ploy by the PM to cover up the shameful reality of homelessness in Britain – the sixth richest country in the world.

The struggle to deport Abu Qatada – blame the pet cat

During a speech at the Conservative Party conference in 2011, Theresa May as the then-home secretary told her party faithful that she planned to implement new immigration rules to make it easier to deport foreign criminals.

In a reference to Abu Qatada, the Jordanian cleric who was to be eventually deported back to his home country, she complained he couldn’t be deported because of his pet cat, claiming: “We all know the stories about the Human Rights Act… about the illegal immigrant who cannot be deported because, and I am not making this up, he had a pet cat.”

Embarrassingly for May, human rights and public lawyers such as Adam Wagner exposed this as a complete myth. Wagner explained in the Guardian at the time: “Had the policy been properly applied the immigration judge would have had to allow the appeal anyway, cat or no cat. And not only did the decision have nothing to do with a cat, it also had nothing to do with human rights either.”

That poor cat. What a complex it must have created for itself on an issue we now know was none of its making. We can only hope it moved on swiftly from such an unnecessarily stressful time.