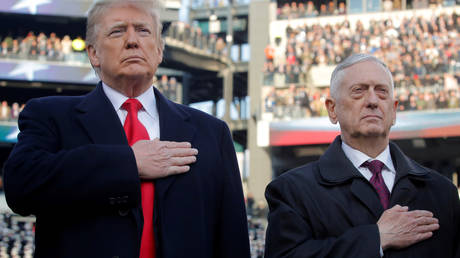 Outgoing US Secretary of Defense Jim Mattis used his last day on the job to take a dig at his soon-to-be-former boss, telling Pentagon employees to “hold fast” in tough times and quoting Abraham Lincoln for some extra motivation.

Mattis had planned to leave the administration in February, giving the White House enough time to find a replacement. Аfter angering Trump with his criticism of the decision to start pulling US troops out of Syria – a decision which enraged conservatives and liberals alike– Mattis was effectively fired two months early.

In his farewell letter, Mattis told Pentagon employees that the Department of Defense was “at its best when the times are most difficult” and encouraged them to “keep the faith in our country and hold fast, alongside our allies, aligned against our foes.”


Really driving home the point, Mattis also quoted an 1865 telegram that President Lincoln sent to the commander of Union forces, General Ulysses S. Grant, in the final weeks of the Civil War: “Let nothing which is transpiring, change, hinder, or delay your military movements, or plans.”

Widely interpreted as a thinly-veiled jab at Trump, the letter is just the latest in an ongoing battle between the president and the military that has prompted much speculation that there is a “deep state” or military faction within Trump’s administration doing what it can to sabotage his plans and neutralize what many regard as his less interventionist mindset.

On Monday, Trump launched his own blistering attack on “some failed Generals” for criticizing his decision to leave Syria and to potentially scale back operations in Afghanistan, saying they were “unable to do the job before I arrived” and reminding people that he’d campaigned against “the NEVER ENDING WARS” the US had become entangled in.

…I campaigned on getting out of Syria and other places. Now when I start getting out the Fake News Media, or some failed Generals who were unable to do the job before I arrived, like to complain about me & my tactics, which are working. Just doing what I said I was going to do!

While both Mattis his former chief of staff John Kelly, who also left the administration just before the new year, are retired generals, the odds are Trump was actually referring to retired Army General Stanley McChrystal.

The former commander of US forces in Afghanista, fired by Barack Obama in 2010, criticized Trump for the Syria decision this week, saying the move would cause “greater instability” and a mindset that the Middle East could “run itself” without US intervention was not realistic. McChrystal also said he “doesn’t think that Trump tells the truth,” and agreed when asked if the US president is “immoral.”

Also on rt.com
Retired Gen. McChrystal slams ‘immoral liar’ Trump for pulling out of Syria, says ISIS on the rise


While Trump has confirmed his desire to remove US troops from Syria, there has been more confusion about the possible scale-back of US operations in Afghanistan, where the military has been bogged down for 17 years. While media reports suggested Trump is ready and willing to wind down US involvement there, too, a White House official said that he had “not made a determination” on the issue.

Trump has picked Deputy Defense Secretary Patrick Shanahan, a former Boeing executive, to serve as acting defense secretary, until a decision can be made about who will replace Mattis.