US Defense Secretary James Mattis says the Pentagon agrees with President Donald Trump on viewing space as a possible battlefield and is considering setting up a combatant command until the Space Force can be created.

“We need to address space as a developing war-fighting domain, and a combatant command is certainly one thing that we can establish,” Mattis told reporters on Tuesday, adding that the Pentagon is “in complete alignment” with Trump’s concerns about protecting US assets in space.

“We’re going to have to address it as other countries show a capability to attack those assets,” the secretary added.

Trump issued a directive in June to begin preparations for creating the Space Force as a separate branch of the US military, along with the Army, Navy, Air Force, Marines, and Coast Guard. Doing so will ultimately require an act of Congress, however.

“We are working our way through all this,” Mattis said. “The vice president is kind-of the point man for the president on this, we are working daily with his office and with supporters on Capitol Hill and the relevant committees.”

Though Mattis was opposed to the idea of setting up a space force last year, he seems to have come around to Trump’s viewpoint that space “is a war-fighting domain just like the land, air, and sea.” 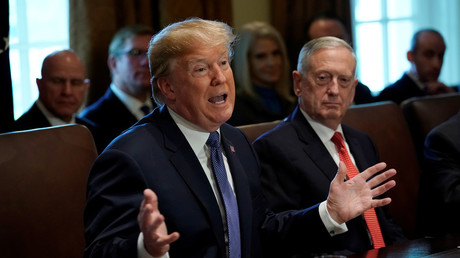 America’s way of life is dependent on space, NASA administrator Jim Bridenstine told CBS News last month. “If we lose the GPS signal, there are no inner bank transfers, that means there will be no milk in the grocery stores, our way of life shuts down, and that’s why hostile countries around the world are taking action to make these capabilities vulnerable for the USA,” he added.

Current Air Force Secretary Heather Wilson has pointed to China’s 2007 use of a guided missile to destroy a satellite in orbit as a potential threat to 77 US military satellites currently orbiting the earth.

“The United States is determined to protect our capability on orbit, we’re going to defend ourselves, and we’re developing the capability to do that,” Wilson said at an event hosted by the Washington Post last month.

Setting up a space force as a separate service branch won’t do much good without a combatant command, Wilson’s predecessor, Deborah Lee James, argued at a Brookings Institute event.

“A military service trains, organizes, and equips, it doesn’t war fight. The combatant commands do the war fight,” James said.

The comments from Mattis on Tuesday seem to indicate the Pentagon is looking at setting up a command first, while continuing to push the launch of Space Force through the bureaucratic channels of Washington.

“We’ll get it right. We’ll work it through the Congress. We have the direction from the president and we’re underway,” Mattis said.