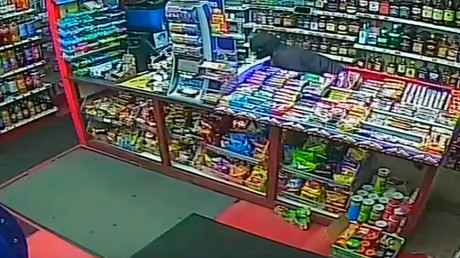 CCTV footage has been released of masked robbers armed with wrenches ambushing a terrified shop worker before ransacking the shelves on Wednesday. Police are appealing for witnesses “so that we can bring the men to justice.”

Officers were called to reports of an armed robbery at N&N Newsagents in Stalybridge, Manchester shortly after 9.15pm.

Footage shows the three men bursting inside the shop before one of them grabs the worker around the neck, drags him to the back of the premises and assaults him.

One of the masked men can be seen stealing large quantities of cigarettes and cash, which he placed in a football-patterned duvet cover that he hung around his neck.

Police say the men proceeded to threaten two members of the public with their weapons before fleeing in a gray Toyota Aventis driven by a fourth man.

The car was later recovered on Cambridge Street, Stalybridge, where it had been burnt causing damage to two vehicles belonging to the community.

Detective Constable Jo Lockett of GMP’s Tameside borough said it was a “shocking attack” that left the victim, shop owners and members of the community “extremely shaken.”

“We are doing all we can to catch the men responsible and have released the CCTV footage in the hope that someone might remember seeing something that can assist our investigation.”