A man caught on CCTV hurling acid at an aspiring model and her cousin, leaving them with “dreadful and life-changing” injuries, has been sentenced to 16 years in jail.

Resham Khan had been out celebrating her 21st birthday with her cousin Jameel Muhktar, 37, when they were attacked in Beckton, east London. They were both left with severe burns and in need of skin grafts after the attack in June. Muhktar was so badly injured he had to be put into an induced coma.

John Tomlin, 25, from Colman Road, Canning Town, admitted intentionally causing the pair grievous bodily harm. He was sentenced at Snaresbrook Crown Court, where Khan said her birthday “turned into a day where my face was taken away from me. 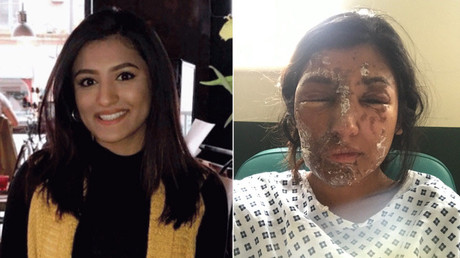 “I have been looking at myself in the mirror, it upsets me, it brings back the incident on the day, it doesn’t look like me,” she added in her victim impact statement.

Sentencing Tomlin, Judge Sheelagh Canavan said the injuries were “dreadful and life-changing.” She added: “It is becoming all too common an occurrence on our streets that members of the public are pouring water over people who have had acid thrown over them, as if this is some sort of fashionable assault that is being carried out.”

As Tomlin was being sentenced, Scotland Yard released CCTV images of the attack. There had reportedly been an altercation between Muhktar and Tomlin on the pavement, after which Muhktar returned to his car.

As most of the acid dropped on Khan, she started screaming in pain. Her cousin tried to drive away but crashed into the car in front. As Muhktar pulled onto the road, Tomlin then ran around the car and threw acid at him. He only stopped when the driver managed to outpace him.

Khan, a Manchester Metropolitan University student, suffered face and neck injuries and was left with damage to her left eye. While being left with lifelong scars, the court also heard she has suffered from severe depression and anxiety as a result of the attack. Mukhtar has permanent scarring to his head, neck and body, and has lost hearing in one of his ears.