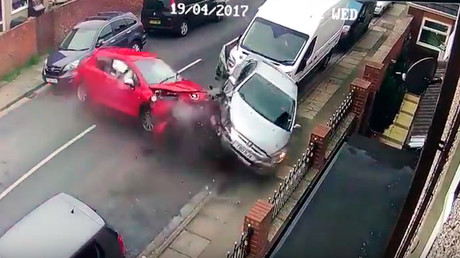 The moment a man crashed his car into other parked vehicles before running off to report it stolen has been caught on camera.

The footage shows James Baker running away from his smashed up Peugeot 207 in Cleethorpes. The collision, which happened in April last year and involved a total of five vehicles, was so severe that Baker’s car bounced onto the other side of the sidewalk. Smoke is also seen coming from the car engine and wreckage from the hit cars spilling over the street.

The driver, from Grimsby, then ran to a telephone box to call the police and report his car had been stolen from a garage.

Baker later told police he was not driving the car and that “anybody could have taken it” as he had boasted about it and people would have stolen it.

A magistrates court last week heard that Baker was lucky not to have killed anyone. A woman in another car involved, however, suffered whiplash injuries when her vehicle was slammed into others.

Baker, who was absent from court, was found guilty of driving carelessly, failing to stop after an accident, failing to report the incident and having no insurance or the correct license.

Ernie Lidster, mitigating, said Baker had been struggling after breaking up with his girlfriend, with threats allegedly made and him spending nights sleeping in the car in the garage.

The car was “his pride and joy” but, one day, “everything got on top of him” and, for a reason that he could not explain, he drove the car, with two friends inside, and there was an accident. “He panicked and he ran off,” Lidster said, the paper reports. “He is aware of the seriousness of his actions. He might not have been aware at the time he got into the car.”

Unemployed Baker was fined £240 (US$340) and banned from driving for two years.