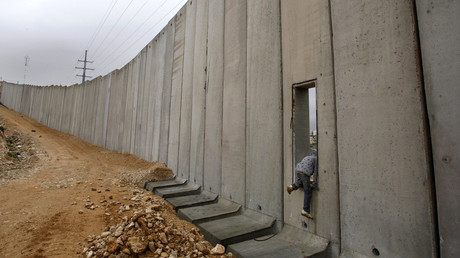 A major donor to the campaign for Britain to remain in the EU is also a significant shareholder in a company that provides technology for Israel’s illegal segregation barrier in the West Bank.

Business tycoon Nathan Kirsh, who has a net worth of £4.4 billion ($6.3 billion), donated £500,000 to Britain Stronger in Europe, making him the campaign’s third largest contributor.

It has emerged the South African-born property developer owned the largest stake in Israeli firm Magal Security Systems until two years ago.

Magal supplies “perimeter control” and intrusion detection systems for Israel’s separation barrier with the West Bank, which when completed will be 430 miles (700 km) long.

The wall has been condemned by human rights groups, including the International Red Cross, which in 2004 deemed it to be violation of the Geneva Convention by causing “serious humanitarian and legal problems.”

The barrier was declared illegal in a non-binding advisory opinion by the International Court of Justice in 2004.

Kirsh, 84, first invested in Magal in 1984 and continues to own five percent of the company’s shares.

Listed on the Nasdaq, Magal supplies the majority of detection systems for Israel’s controversial wall, along with equipment for a barrier that separates Israel from the Gaza Strip.

Magal started as a branch of the state-owned Israeli Aerospace Industry (IAI) in 1965 before being privatized in 1984, with a quarter of its shares still owned by IAI.

In addition to his investments in Israel, Kirsh also owns two-thirds of US cash-and-carry store Jetro and property around the world, including NatWest tower in London.

“Kirsh’s long-term approach has been to ensure that they avoid taking unquantifiable risks [and] Brexit would be a significant leap into the unknown,” a spokesperson for Kirsch told the Financial Times.

“That financial stability is a cornerstone of all the geographies in which [Kirsh does] business and [it] would hope that the UK would take a lead in Europe rather than exiting Europe.”

A spokesperson for the Britain Stronger in Europe campaign said: “The Tower Limited Partnership is the owner of Tower 42. The campaign has not received a donation from Magal Security Systems.”