Senator Bernie Sanders’ anti-corporate welfare bill aims to hammer the companies that pay their workers so poorly they need government aid to survive. Corporate media outlets are gunning for Sanders in response.

The Stop Bad Employers by Zeroing Out Subsidies Act (Stop BEZOS) would impose a tax on companies equal to the amount of money their employees receive from federal welfare programs such as food stamps or Medicaid. It would apply to both full- and part-time employees as well as independent contractors.

This bill isn’t perfect. No legislation is. But it speaks to the injustice people perceive —that the market isn’t properly rewarding work. The bill can be further tweaked so corporations pay a decent wage & instead of just compensating those with fancy titles or degrees.

The proposed bill would target companies with 500 or more employees, including some of America’s largest corporations such as Amazon, Apple and Walmart. Its name is a pointed jab at Amazon CEO Jeff Bezos, the world’s richest man. Bezos is worth $160 billion, and earns the median salary of an Amazon worker – $28,000 – every nine seconds.

Workers in Amazon’s UK distribution facilities are often so overworked that they are reportedly forced to urinate in bottles to make their quotas. In the US, a large number of them earn such a pittance that they rely on food stamps to make ends meet, and Medicaid to take care of their healthcare needs. In Arizona, one in three Amazon workers is on food stamps.

Amid the negative publicity, Amazon has resorted to paying employees to tweet nice things about the company. The tweets praise working conditions at warehouses while repeating the mantra of “safety is the priority and we just want to get your packages out on time.”

Working conditions at my JAX2 FC are great. Temp controlled warehouse, safety is the priority and we just want to get your packages out on time.

But Bezos apparently has little to fear. Since Sanders unveiled his ambitious proposal, the mainstream media has taken over PR duties for his omnipresent megacorporation.

“In Bernie Sanders vs. Amazon’s Jeff Bezos, only workers lose” read a headline from USA Today on Sunday. What Sanders proposes, economist Ryan Bourne argued, is “dangerous,” as it would make workers who would rely on government assistance unemployable. Implicit in this argument is the assumption that Amazon is duty-bound to pay the lowest wage possible, instead of raising it to avoid this situation in the first place.

“Shareholders and customers of companies should not be responsible for every factor of their workers’ lives,” Bourne wrote. He is the chair in public understanding at the Cato Institute, a think tank of free-market evangelists that sits somewhere to the right of Ayn Rand. 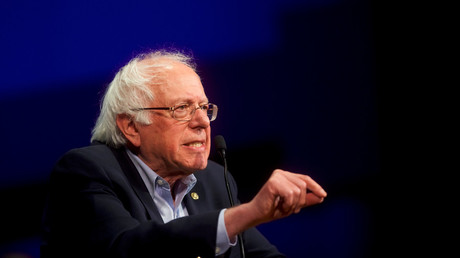 “Bernie Sanders Picks the Wrong Kind of Fight With Amazon,” declared Noah Smith in Bloomberg last week. Making a similar case to Bourne, Smith argues that Amazon would be morally bound to fire workers before raising the minimum wage, or would actually cut wages to save money. As government benefits don’t rise 1-for-1 with falling income, Amazon could game the system instead of raising wages.

Instead, Smith suggest federally mandating a higher minimum wage, which is a frequent progressive talking point.

The Washington Post (fully owned by Bezos), blasted Sanders for trying to “outsource the fight against poverty,” which editor Charles Lane argues is the government’s job.

“Bezos is good at many things,” Lane wrote on Tuesday. “As a businessman whose shareholders depend on him to meet the demand for low-cost consumer goods, however, he’s not well-positioned to produce public goods. And equality and a decent safety net, like a working court system and national defense, are public goods.”

But Amazon is not the only corporation that would have to change its ways under the bill proposed by Sanders. Walmart and McDonalds have more employees on food stamps, according to an analysis by New Food Economy. Accusations of abusing corporate welfare have been leveled at Walmart for decades. Most notably, liberal agitator Michael Moore focused a large segment of his 2009 documentary ‘Capitalism: A Love Story’ on the practice.

In naming Bezos, however, Sanders takes advantage of the billionaire’s ‘household name’ status to get people talking about income inequality and ending it, something the Vermont socialist has been pushing for decades. Rolling Stone’s Matt Taibbi argued on Tuesday that this was the senator’s aim all along.

That kind of publicity seems to work, too. Walmart raised its minimum wage to $9 per hour in 2015, citing a desire to improve workers’ welfare, and therefore customer service in-store. Earlier this year, the retail giant bumped its minimum wage up again to $11, with CEO Doug McMilon crediting President Donald Trump’s trillion-dollar tax cuts for making the jump possible.

In painting a target on Amazon, Sanders has also made himself an otherwise unlikely ally. Trump has blasted Amazon for taking advantage of a tax loophole that allows online retailers to avoid paying state-level taxes. He has also attacked Bezos for putting small-scale ‘mom and pop’ retailers out of business, taking advantage of the US postal system, and perhaps most importantly to him, funding negative articles on his administration in the Washington Post.