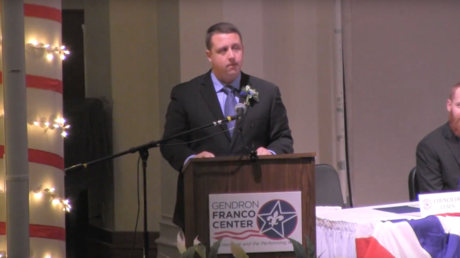 Shane Bouchard, the Republican mayor of Lewiston, Maine, has resigned, after messages were leaked showing he exchanged racist jokes with a former lover.

During his mayoral campaign in 2017, Bouchard was allegedly having an affair with a local woman, Heather Everly Berube. As well as discussing politics, Bouchard spiced up his text messages to Berube with some light flirting and some full-on racism.

“All my jokes are quite racist lol,” he reportedly said in one message, adding: “What do you call 2 old black people sitting on your front lawn.”

This is one of the screenshots released last night by Heather Berube of her conversations with Lewiston Mayor Shane Bouchard.

His messages prove that he is unfit for office. Lewiston deserves a mayor who knows black people are human beings, not “farm equipment.” #mepoliticspic.twitter.com/X0TFRfoNXn

Before quitting as Lewiston’s mayor, Shane Bouchard griped “the media does not discriminate between facts & rumors.”
He resigned, though, because of what he wrote & what he did.
Don’t blame journalists, Shane. Instead, look in the mirror. #mepolitics

In another message, Bouchard called a GOP meeting he was attending a “clan meeting.”

Berube released the messages to the Sun Journal on Wednesday. Bouchard initially attempted to downplay the scandal, saying his text was “a joke” and not a “reflection of how I feel,” before resigning from office on Friday.


Racial issues featured front-and-center in Bouchard’s election. His Democratic opponent, Ben Chin, complained in internal emails that he had run into “a bunch of racists” while on the campaign trail. Locals were unhappy with Chin’s portrayal of them, and Bouchard went on to win after Chin’s emails were made public. Berube, who had volunteered with Chin’s campaign, claims she’d leaked the emails to Bouchard.