Boris Johnson won’t cross paths with Turkish President Erdogan after he branded him “the w***erer from Ankara” in a crude – yet prize-winning – limerick, which also implied that Erdogan had a soft spot for goats.

The crass poem, penned prior to the MP’s ascension to cabinet, was published by the Spectator in 2016 as a rebuff to Erdogan’s efforts to prosecute a German comedian for writing an offensive poem. Johnson’s literary effort, which implied sexual relations between the Turkish leader and a goat, won the now-foreign secretary £1,000. It also led to accusations of racism as the suggestion of beastiality with a goat has been used as slur against Muslims in Europe.

“There was a young fellow from Ankara, Who was a terrific wankerer,” reads the winning poem from Britain’s top diplomat. “Till he sowed his wild oats, With the help of a goat, But he didn’t even stop to thankera.” 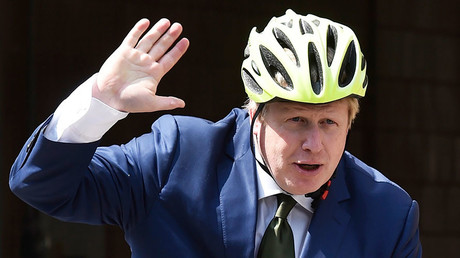 At the time, Johnson expressed surprise at winning the rude limerick contest. Although he may not be laughing now, sent overseas on other duties instead of meeting the Turkish president throughout his three-day UK-trip.

Johnson flew to Brussels on Monday, reports the Sun, for urgent talks with Iran’s foreign minister over the country’s endangered nuclear deal. The Foreign Office deputy, Europe Minister Alan Duncan, was instead dispatched to officially greet Erdogan on his arrival in the UK on Sunday evening.

The visit prompted violent protests outside Downing Street on Tuesday, as anger over the Turkish president’s rule boiled over on British soil. A spokesman for Prime Minister Theresa May confirmed that the PM would broach the topic of human rights with the Turkish president during Erdogan’s tour of the UK.

“Our close relationship with Turkey allows us to have frank discussions and you can expect the prime minister to discuss human rights when they speak later today,” the spokesman said, adding that they would also discuss how to build cooperation in areas such as counter-terrorism.