Two love-rival neighbors armed with knives have been jailed after being caught on camera dueling outside their homes in a row over a woman.

Stoke-on-Trent Crown Court heard Alan Bishop went to Russell Morris’s home in December brandishing a knife and wearing a scarf around his face because he was unhappy his ex-girlfriend was there. 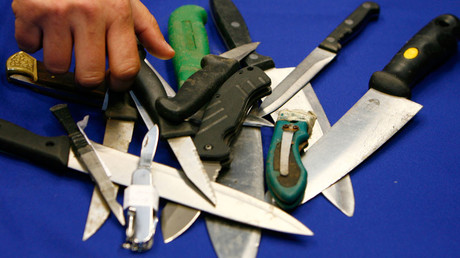 Morris, 45, armed himself with a blade and went outside at 7:30am. Both men lunged and slashed at one another, leaving 40-year-old Bishop with puncture wounds to the arm and chest.

The incident happened in full view of other residents of the nearby flats, and was caught on CCTV.

“They engaged in what is perhaps best described as ‘Wild West’ behavior outside the flat, armed with knives, each engaging in violence towards the other,” Prosecutor Neil Ahuja said, as reported by the Stoke Sentinel.

“Prior to the incident, at 2am, a neighbor was awoken by Bishop shouting outside the building, ‘Get out here, you are cheating on me,’ and heard him banging on Morris’s door.

“There was a repeat of similar behavior at 3am, 5am and 6am.”

“They move backwards and forwards up and down the path as if in a fencing competition.”

Stuart Muldoon, representing Bishop, said his client was concerned for his ex-girlfriend and had earlier tried to “coax” her out of Morris’s flat to be met with “threats and abuse” from Morris.