Janine Jackson interviewed Patty Lovera about the undercovered farm bill for the June 29, 2018, episode of CounterSpin. This is a lightly edited transcript. 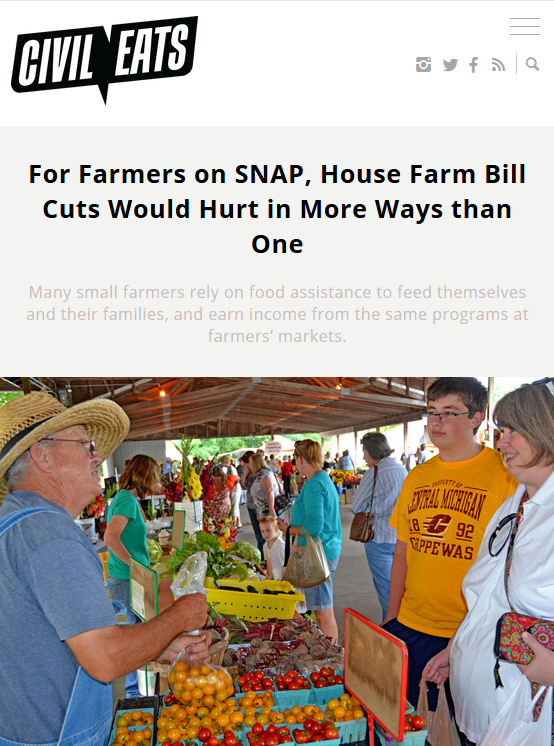 Janine Jackson: After House Republicans passed their Farm Bill, reportedly the first time the critical measure—involving everything from nutrition assistance to crop subsidies—has passed either chamber with only single-party support, Donald Trump tweeted, “Farm Bill just passed in the House. So happy to see work requirements included. Big win for the farmers!”

Among other things, Trump doesn’t mean farmers like the Callahan family, profiled in Civil Eats, small farmers in South Carolina who not only qualify for SNAP—the food assistance program Trump is crowing over making harder to access—but who benefit also from programs Republicans would cut, that encourage the farmers’ markets where the family make much of their income, including selling to people who pay with SNAP benefits.

The Senate version pushes back on some of that, but does that make it good? And what else should we know about what’s likely to be in the final legislation, due by the end of September? Patty Lovera is the assistant director of Food and Water Watch. She coordinates the food team. She joins us now by phone from Washington, DC. Welcome back to CounterSpin, Patty Lovera.

Patty Lovera: Hi, thanks for having me.

JJ: There’s so many elements to this $860 billion legislation, it’s easy to miss things. We’ve seen some attention—and rightly so—on what was apparently the House Democrats’ sticking point, the restrictions that Republicans want to add to SNAP. I want to get to other things, too, but what is your sense of whether this very familiar, punitive, non-evidence-based stuff, to do with Food Assistance Programs—is that going to make it through conference, do you think?

PL: That is the question. You know, every five years or so, give or take a year, we do a Farm Bill, and in the last several cycles, this has been the really big question. And last time, which was the 2012 Farm Bill, which didn’t actually get finished til 2014, a lot of the sticking point was this question. And it’s become this ideological battle over the role of the government in providing some kind of safety net. And, really, the biggest safety net for most families that is left—after welfare reform in the ’90s, and lots of other changes—the most common safety net at this point, for lots of folks, is SNAP, which is the Supplemental Nutrition Assistance Program, which provides some assistance, cash assistance, for people to buy food.

The marriage between providing some assistance to people through food stamps or SNAP was supposed to keep urban and suburban members of the House interested in this bill, even if they didn’t need farm programs. What we’re going to see in the Senate is, the margin is so close they can’t pass the bill with just one party, like they did in the House. And so the hope for dialing back this aggressive attack on SNAP really comes from the Senate.

JJ: With the focus on that, and as I say, it’s deserved, to explode the rationales behind this punitive stuff, but there’s other stuff, a whole lot of other stuff, in the Farm Bill. And I just wonder if you could tell us about some of the other points of concern that maybe are being less openly discussed.

PL: Sure, you’re right. The fight over the safety net program of SNAP has really dominated the discussion, even justifiably. And it’s also the biggest expenditure under this bill, by a huge margin; it’s like 75 to 80 percent of the spending. But lots and lots and lots of things that impact the way our food system operates come from the Farm Bill. I think if you’re not involved in farming, people don’t realize the extent to which the government is involved in this industry, in this marketplace.

Whether it’s something you would call a “subsidy” to a farmer who’s growing corn or soybeans, or it’s crop insurance, the government is involved in those programs. Research into the environmental impacts of different farming practices, support to give farmers to do different environmental practices, to improve water quality or adapt to climate change—there’s a lot of moving parts of this thing. If the bill doesn’t happen on time, by September 30, some of those programs, especially, a lot of people call them the “tiny but mighty” programs that help people transition to organic agriculture, or help young farmers get started, or help people use food stamps at a farmers’ market, a lot of those programs are written that they expire if the Farm Bill expires. So there is damage that is done if this process breaks down.

JJ: We see, sort of, the country moving in one direction. Folks who are able to are looking to eat healthier, who are looking to eat in a sustainable way, who are looking to eat more locally. All these things are happening, and yet consumer power doesn’t play out the way you might think it will. When the crops that have the biggest environmental impact don’t really—you know, it’s not the green beans that you’re getting at the market from upstate. 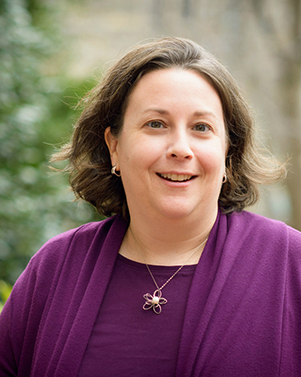 Patty Lovera: “I don’t think any of us voted to have this unhealthy, environmentally damaging system.”

PL: Yeah, our food system looks the way it looks for a lot of reasons, and a lot of those reasons are policy. I don’t think any of us voted to have this unhealthy, environmentally damaging system. And if you listen to the ideology around, “Well, if you don’t like the food system, it’s because that’s what you’re voting for with your dollars”—it’s more complicated than that.

Farmers grow what they can sell, and in Nebraska, there’s not enough people to buy direct from them if they just switched to green beans, right? So we have commodity markets, we have very elaborate systems that big corporations have designed, and they have designed our farm policy to support them. And actually, in those markets for these commodity crops—corn and soybeans and dairy—farmers are having yet another terrible year. We’re going four and five years into terrible farm prices. And when you add to that all of this confusion being caused by the Trump administration’s daily changes of trade policy, there’s a lot of chaos and there’s a lot of fear, and what we’re getting from Congress is the same old thing: The House is just waging welfare reform disguised as a Farm Bill, and the Senate’s doing the same old thing. And it really isn’t fixing a lot of the problems we have, which is a really corporate-controlled system that drives people to overproduce these crops.

JJ: And that’s just what I wanted to get to, because I think in a lot of areas of life right now, folks are trying to have really an alternate vision, to not just rail against what is, but to put forward, you know, “We could do things differently.” And the food system, of course, is a hugely important piece of that, or could be, and if we want to have a system that serves the most people the healthiest food, and allows people who grow that food to have a life, how fundamental a shift would that require? Is that something that you can do through politics?

PL: We can. It’s a good question. We can. We just haven’t done it for a lot of years. And at the core of it, again, it’s ideological. In the New Deal era into the ‘70s and ‘80s, we had a lot of policies that dealt with the fact that farmers act on their own. Your individual inclination as a farmer is to produce as much as you can, right? And even if you don’t make a lot for every bushel of corn, maybe you’ll make it up by selling more bushels. When you add that up together across all those farmers, that’s a disaster economically, because you have so much corn the price goes down.

So we used to have a lot of policies that, when you knitted them together, there was multiple moving parts. We used to have a price floor, which is like a minimum wage, to say the price of corn will just not go below X. We used to pay farmers to not farm some acres, say, you know, “It’s near water, you’re going to lose all your soil, don’t farm there, we’ll pay you a little rent not to.” We used to have a reserve. If there was too much corn, we’d get it off the market to help the price for farmers a little bit.

All of those things together dealt with kind of this natural inclination to just overproduce, which is the natural human inclination. We’ve chipped away at those over the years through things like Farm Bills. We don’t have them, and now we have too much of a lot of these things. We have bad prices for farmers and so, “Oh, now we do a little thing where maybe they can get crop insurance to maybe make up for some of that.” But instead what we do is, we look for other places to dump these foods, and maybe it’s corn syrup in everything, maybe it’s that we put cheese in the crust of the pizza, because we have so much milk we’ve got to find places to put the cheese, and we also do it through our trade policy. So all of these fights about yelling at Canada, because they have a system that protects their dairy farmers, rather than ruin the economics of the Canadian dairy farmers, maybe we can talk about why we have so much milk here, we have to find places to dump it.

JJ: We’ll end on that note. There’s clearly much more to be discussed here, and we’ll follow this bill as it makes it way through conference by—it’s really got to be the end of September, right?

PL: Mitch McConnell says he wants to do it by July Fourth. The current bill expires at the end of September. They can extend it. They’ve done it before to keep these programs running. But they do wave that deadline around. So we’ll see what happens as we get into the heat of the summer.

JJ: We’ve been speaking with Patty Lovera of Food and Water Watch. They’re online at FoodAndWaterWatch.org. Thanks so much, Patty Lovera, for joining us this week on CounterSpin.