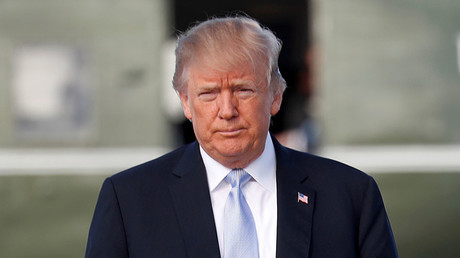 Speaking in the Oval Office, US President Donald Trump has said it appears that Russia was behind the attack on former double agent Sergei Skripal.

Trump made the comments while speaking to the press during a meeting with Irish Prime Minister Leo Varadkar. A member of the press corps asked the president if he thinks Russian President Vladimir Putin was behind the attack, prompting Trump to respond that “it looks like it.”

“I’ve spoken with the [British] prime minister and we are in deep discussions. It’s a very sad situation,” he continued. “It certainly looks like the Russians were behind it. Something that should never, ever happen and we’re taking it very seriously as, I think, are many others.”

Skripal and his daughter Yulia were found unconscious on a bench in the city of Salisbury, England in early March. The pair remain in critical condition in hospital. British authorities claim they were poisoned with a Soviet-engineered nerve agent called Novichok.

Russia has repeatedly denied any involvement in the incident. At a news briefing on Thursday Foreign Ministry Spokeswoman Maria Zakharova accused London of making “insane” accusations while refusing to share any evidence with Moscow.