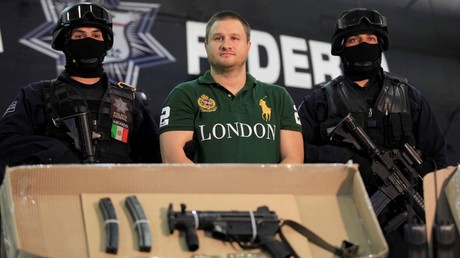 The cartel mobster, who is known as La Barbie due to his light-skinned complexion, pleaded guilty to charges related to running operations for the Mexico-based Sinaloa and Arturo Beltran-Leyva gangs. He was arrested in 2010 after agents from the US Drug Enforcement Administration uncovered his crimes through a series of wiretaps.

The organized crime groups were once a homogenized unit in Mexico, before a dispute led members of the Beltran-Leyva family to defect from the notorious leadership of Joaquin ‘El Chapo’ Guzman.

Villareal was sentenced on Monday by a US District Court after admitting to being a high-ranking member of both groups. Nicknamed La Barbie by those in the criminal underworld, Villareal initially embarked on a life of crime by dealing marijuana at age 26 in his native town of Laredo, Texas.

According to the US Department of Justice, Villareal became a heavy hitter in the Mexican crime scene after successfully shipping 150kg-180kg of cocaine from Mexico to US cities like New Orleans and Memphis.

Sentenced to 49 years and one month in prison for cocaine trafficking and money laundering, the 44-year old was also ordered to forfeit $192 million in crime proceeds to authorities.

Following his conviction, the US Department of Justice described Villareal as a man who had climbed the cartel ladder in Mexico “leaving in his wake countless lives destroyed by drugs and violence.”

“His ruthless and violent drug trafficking crimes and activities posed a significant threat to the quality of life in our country and elsewhere. The lengthy sentence he received makes the US a safer place,” he added.