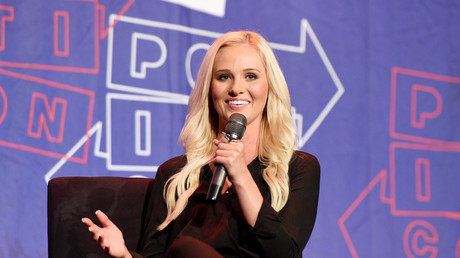 Conservative commentator and all-around object of liberal hatred Tomi Lahren has found herself in a strange situation: liberals are suddenly defending her.

Over the weekend, Lahren was at a restaurant in Minneapolis with her mother when a random diner who was irked by Lahren’s presence decided to chuck a glass of water at her. The incident was caught on camera and — of course — went viral on Twitter.

Even the president chimed in to defend Lahren, tweeting that she is “a truly outstanding and respected young woman.”

Everybody is with Tomi Lahren, a truly outstanding and respected young woman! @foxandfriends

The outspoken political commentator and Fox News contributor has drawn the ire of liberals for her conservative views, but she has also faced criticism from the right after admitting that she is pro-choice when it comes to abortion — a view which got her fired from The Blaze conservative website.

Liberal comedian Kathy Griffin, who was fired by CNN last year for posing in a gruesome photo with the head of an apparently decapitated Donald Trump, said she disagreed with Lahren politically but didn’t think it was “cool” for someone “to resort to physical actions” to make their point.

I couldn’t disagree more with @TomiLahren, but I don’t think it’s cool to resort to physical actions to make your point.

The first amendment is a beautiful thing – use it. https://t.co/Yx8obh0aH0

Andy Lassner, the executive producer of The Ellen Show and a prolific tweeter, also entered the debate, saying he had thought about it and ultimately decided that throwing a drink at Lahren “crosses the line” and was not “something to be celebrated” by people.

Been thinking about it.
I know many will disagree, but here’s how I feel.
I detest @TomiLahren.
I think she’s terrible.
I think she’s racist.
I think her shtick is dumb.
However, I don’t think throwing a drink in her face is something to be celebrated.
It crosses the line.

NO ONE has the right to throw a drink in ANYONE’s face, not even @TomiLahren as much as I get how much you dislike her, this is America b/c everyone can live freely regardless of what they say about anything. #FreeSpeech#2WayStreet

Lahren herself tweeted to thank people for the support, “even from those who normally dislike me.”

I appreciate the words of support- even from those who normally dislike me. Free speech is a gift- no need to resort to that kind of attack. I’ll discuss the restaurant incident on @foxandfriends tomorrow morning.

Some people were not so nice, however, with one Twitter user suggesting that the drink thrower should have finished the water and thrown the glass instead.

Don’t throw drinks at Tomi Lahren. That’s a waste of a good drink. Finish it first then throw the glass.