Almost a week after police killed a Wichita, Kansas man responding to a hoax ‘swatting’ call, his mother is demanding police let her bury her son. A California man who made the call may face murder charges.

Andrew Finch, 28, was shot and killed by Wichita police last week. On Tuesday, his mother Lisa wrote a letter to Wichita mayor Jeff Longwell and Police Chief Gordon Ramsay, listing eight questions. Among other things, Finch is asking why authorities have not revealed the identity of the officer who shot and killed her son, why officers handcuffed the family and interrogated them after Finch was shot, and where her son’s body is being kept, according to local outlet WKTR.

She asked why “Wichita City leadership is compounding our grief and sorrow, by keeping my son from us,” according to WKTR.

“Please let me see my son’s lifeless body,” she wrote. “I want to hold him and say goodbye. Please immediately return his body to us.”

Wichita Police Chief Gordon Ramsay said none of the officers at the scene were members of the SWAT team and were not trained to handle hostage situations, according to the Wichita Eagle. The initial 911 call showed up as a local number, he said. “The information I have, it was a spoofed number.”

Police have released portions of video of the incident. “We believe what it shows… His (Finch’s) hands go up and down and around his waistband, and the one arm goes out at about a 45-degree angle,” Ramsay said.

The Wichita incident was the first death due to “swatting” in the US, as far as Ramsay was aware.

“There will be a thorough review of this,” the chief said Tuesday evening. “We want to do everything we can so nothing like this never happens again, ever.”

The police officer who killed Finch has not been identified by name. Officials said he was on paid leave pending an investigation. He is a seven-year veteran of the department. Finch’s family has said through their attorney that they want the officer to be charged.

“Justice for the Finch family constitutes criminal charges against the shooting officer and any other liable officers as well as damages against the city of Wichita for the policies and practices of its Police Department,” the family’s lawyer, Andrew Stroth, told AP.

Barriss waived extradition. He is held in jail without bail and his hearing is over.

Tyler Barriss, 25, was arrested Friday in California in connection with the shooting, after Wichita police issued a fugitive warrant. After a court hearing in Los Angeles Wednesday, Barriss was confined to jail without bond. He is expected to be extradited to Kansas within weeks. 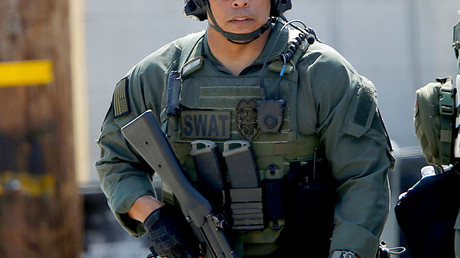 Barriss is alleged to have made the hoax call as a harassment tactic known as “swatting.” He was reportedly feuding with another person over an online video game, and called police to what he believed was his desired victim’s address, telling them there was a suspect who had shot his father and was holding the rest of his family hostage. The responding officers arrived to what was actually Finch’s address and one of them opened fire. Police said Finch had moved his hand toward his waist. He had been unarmed.

This is not Barriss’ first run-in with the law. In 2015, he was sentenced to two years and eight months in jail for making as many as 20 swatting calls and false bomb reports against Los Angeles-area schools and a television station, according to KNBC.

Barriss is charged with making a false alarm, which entails calling emergency services and knowingly providing false information. It is considered a low-level felony in Kansas and carries a maximum of 34 months in prison, though prosecutors could add more charges depending on the results of a police investigation.

He could also be charged with second-degree murder for unintentionally causing a death by reckless actions, Elizabeth Cateforis, a law professor at the University of Kansas, told the Sacramento Bee.