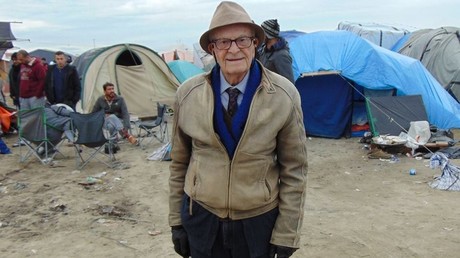 Harry Leslie Smith, the WWII veteran, NHS campaigner and pro-refugee activist, has died in Ontario, Canada at the age of 95, after suffering from suspected pneumonia. RT takes a look at a legend of the left.

The 95-year-old Royal Air Force (RAF) veteran, originally from Barnsley in South Yorkshire, came into the public eye in 2014 after making a speech defending the existence of Britain’s National Health Service (NHS) at the Labour Party conference. He passed away on Wednesday.

His son John, who had been by Smith’s bedside at a hospital in Canada, confirmed the news on Twitter.

Tributes have been pouring in for the self-described “world’s oldest rebel”, who had garnered more than 250k Twitter followers, helped in no small part with his support for refugees, constant criticism of the UK government’s austerity policies and a collection of authored books.

Here are just a few of his best moments:

“I won’t allow my obligation as a veteran to remember those who died in the great wars to be co-opted by politicians to justify our folly in Iraq, our morally dubious war on terror & our elimination of one’s right to privacy.”

In 2008, he insisted his generation “helped build [a world] on a foundation of decency and fair play is being swept away by neoliberalism and the greed of the 1%, which has brought discord around the globe. Today, the Western world stands at its most dangerous juncture since the 1930s.”

‘Living through Great Depression was not like Downton Abbey’

“I came into this world in the rough and ready year of 1923. I’m from Barnsley and I can tell you that my childhood, like so many others from that era, was not like an episode from Downton Abbey.”

RT UK’s Bill Dod asked him what he made of Cameron’s assertion that he has done more to combat tax avoidance than any other prime minister.

“I would simply say one word and that is bulls***.”

He told Defence Secretary Gavin Williamson to “get off the pot” over voting against the military covenant which refers to the mutual obligations between the nation and its armed forces.

Labour leader Jeremy Corbyn paid tribute to the Smith, who had been a lifelong supporter of his party, in parliament during PMQs on Wednesday.

Corbyn told MPs: “He was an irrepressible campaigner for the rights of refugees, for the welfare state and for our National Health Service.”

We will all miss Harry Leslie Smith – he was one of the giants whose shoulders we stand on.

A World War Two veteran who dedicated his life to fighting for our National Health Service, a peaceful world and for countries to meet their moral responsibility by welcoming refugees. pic.twitter.com/1RW63dSa6Y