Brexiteers have reacted with fury at the upcoming launch of a new campaign by pro-Remain group ‘Best for Britain’ which is demanding a second referendum on the UK’s membership of the European Union.

“We made our mind up already,” said UKIP MEP Nigel Farage on his LBC radio show, calling out the “great globalist” George Soros for his part in funding Best for Britain to the tune of £500,000. 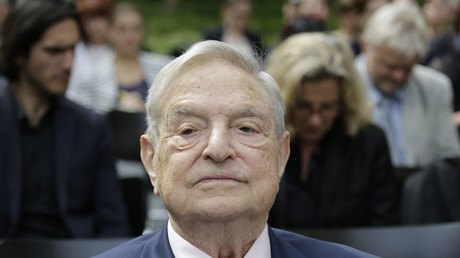 Calling the June 2016 vote “the democratic exercise in the history of this country,” Farage took shots at Soros’ remarks, reiterating that the people of Britain “had made our minds up” already in regards to Brexit, before warning Soros and his friends want to “force it upon us, well then we will beat you again.”

Soros, a US-Hungarian billionaire philanthropist, who has previously heavily funded pro-European campaigns and initiatives, told a summit organized by the European Council of Foreign Relations Tuesday: “Ultimately it’s up to the British people to decide what they want to do. It would be better, however, if they came to a decision sooner rather than later.”

He told the audience at the event in Paris that ‘Best for Britain,’ who secured a parliamentary vote on the triggering of Article 50, would be launching a new campaign “in the coming days,” to demand another public poll on the final deal hammered out with Brussels, and to include an option for the UK not to leave at all.

The Mail Online, which last week reported on anti-Brexit “plotting” by ‘Best for Britain,’ labelled remarks made by ‘Best for Britain’s’ chief, Lord Malloch-Brown, as an “incendiary intervention,” when he compared Brexit to the appeasement of Nazi Germany.

Why do people such as Remainers Soros & Miller think it is right to use their £millions to overturn a democratic vote, trampling on the rights of 17.4 million people? What next General Election meddling? #EnoughisEnough#Brexit is going to happen! https://t.co/AvPI2Vep8d

Speaking to BBC4s Today program, Malloch-Brown said: “Britain’s history as an island nation adjacent to mainland Europe is when we try to, sort of, pull away from Europe’s problems and close ourselves off to them they have a horrible habit of infecting us anyway.”

“Appeasement in the 1930s, you name it. For centuries Britain has ignored events on continental Europe at its peril,” he added.

Referring to Soros as a “scumbag,” the Brexit group Leave.EU tweeted reminders that the billionaire had “profited big time from speculating against our currency,” a reference to Soros betting against the Sterling on global money markets in 1992.

Malloch-Brown dismissed the currency speculation profiteering as an “unrelated issue” to the anti-Brexit push.